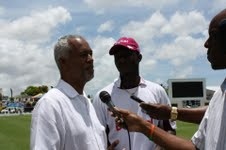 The West Indies Cricket Team has expressed solidarity with a vision for the elimination of mother-to-child HIV transmission in the Eastern Caribbean and Barbados in the near future.

The team hosted a group of Barbadian students at the Kensington Oval today. They joined the Joint United Nations Programme on HIV/AIDS (UNAIDS) Caribbean Regional Support Team (RST) in articulating the need for generations of West Indian people to work together with a view to “getting to zero” new HIV infections.

The event was part of the Think Wise Campaign, a global partnership between UNAIDS, the United Nations Children Fund (UNICEF), the International Cricket Council (ICC) and the Global Media AIDS Initiative.

Think Wise uses the power of cricket to tackle key issues around AIDS. It places particular emphasis on prevention messages as well as the education and empowerment of children.

Today’s event underlined the idea that in order to achieve an AIDS-free generation, young people should be engaged.

“I am thrilled that players from both the West Indies and Australia have supported the Think Wise Campaign. The children have loved meeting their favourite players and learning some new skills. At the same time, they have gained awareness about HIV and the importance of treating all people with equal respect and compassion. 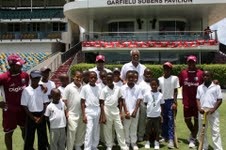 Like the cricketers, these children can be agents of change in their families, communities and schools,” said UNAIDS Caribbean RST Director, Dr. Ernest Massiah.

West Indies Captain, Darren Sammy, endorsed the call for women to access life-saving care and treatment in the context of supportive Caribbean communities.

“We have the medicines, we have the knowledge. There is no need for any Caribbean child to be born with HIV. And there is no need to treat anyone any differently because of their HIV status,” Sammy said.

A regional Elimination Initiative aims to eradicate mother-to-child HIV transmission in Latin America and the Caribbean by 2015. UNAIDS has said that the Eastern Caribbean, with its smaller disease burden, can reach the target far sooner. at present this form of transmission accounts for between eight and ten percent of all HIV infections in the Caribbean as a whole.

Yet some Caribbean countries have either achieved or are close to achieving elimination targets for prevention of mother-to-child transmission (PMTCT). For example from 2007 to 2010 Barbados had no HIV positive babies on record.

Led by the Pan American Health Organisation (PAHO), the Elimination Initiative will address issues relating to the integration of the PMTCT response into healthcare services and sustainability. The other shared challenges of PMTCT programmes are all linked to stigma and discrimination.

Because of a fear of unfair treatment some mothers do not practice life-saving behaviour such as accessing early antenatal care, making their babies available for follow-up testing and care and abstaining from breastfeeding.

“The Eastern Caribbean can eliminate mother-to-child transmission because we have the means to prevent it,” Massiah stressed. “West Indian people can play a part by addressing the negative attitudes and judgments associated with HIV. This would allow mothers across our region to feel safe and confident about accessing life-saving testing, treatment, care and support.”