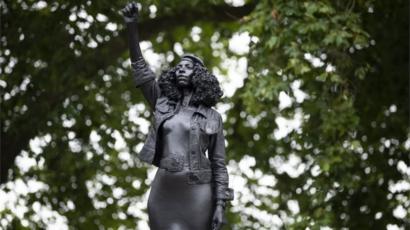 A figure of a Black Lives Matter protester has appeared on the plinth previously occupied by the statue of slave trader Edward Colston.

A sculpture of protester Jen Reid was erected early on Wednesday in Bristol city centre where the Colston statue was pulled down last month.

Ms Reid had been photographed standing on the empty plinth after the Colston statue was toppled during the march.

Mayor Marvin Rees said the statue did not have permission to be installed.

Artist Marc Quinn said the black resin statue, called A Surge of Power, was meant to be a temporary installation to continue the conversation about racism.

He said he was inspired to create it after seeing an image of Ms Reid standing on the plinth with her fist raised during the Black Lives Matter protest on 7 June.

Mr Quinn then contacted Ms Reid through social media and they worked together on the statue, which was erected shortly before 04:30 BST.

The statue has since been removed by city authorities and is being stored in a museum along with placards from the Black Lives Matter protest.