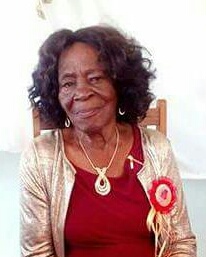 She reminded me so much of when Brathwaite blasted six, six,six, SIX – to win it for the WestIndies! (And btw, do you remember where you were when that happened?…)

I will lift up mine eyes unto the hills, from whence cometh my help.

2 My help cometh from the Lord, which made heaven and earth….

8 The Lord shall preserve thy going out and thy coming in from this time forth, and even for evermore. Amen

It was the middle of the First World War, April 27th 1916, when Meonette burst onto the scene in Dublanc. In those days, Dominica’s small villages had no paved roads, no motor cars, no running water, no telephones or television. She married and moved to Paix Bouche in 1968. Since then, Ma Leonce is well known as a community activist.

Like many housewives of her day, she laboured at home and in the garden. Her sturdy performance at her momentous birthday bash proved she is by far one of the youngest-acting 100-year olds you may ever come across. If there is anyone who stands a chance of challenging Ma Pampo’s 128 year international record, it could be Ma Leonce. She outlived her husband, 10 sibs and two children. Yet, the third, fourth and fifth generations, along with dignitaries, family and friends from far wide turned out in numbers to bless her. Anyone having pics that would do more justice to the occasion, please forward them to DNO.

According to the Dominica Council on Aging, Ma Leonce joins the ranks of nearly 30 centenarians in Dominica today (one of the highest per capita in the whole world). According to BBC, ‘Dominica boasts a remarkable concentration of very old people in good health and they’ve begun to arouse the interest of medical science. This is ‘3 times the average incidence as in developed countries such as Britain and the United States.’

Only Canada in the Western hemisphere boasts a higher longevity. Dr. Noel Boaz, a Ross University School of Medicine anatomy professor in Picard, feels the key to Dominica’s longevity has been our lifestyle. He focuses on natural local diet, rough terrain and hard physical work. Unfortunately he does not feel the phenomenon will last because of the new dense vehicular traffic and fast food. ‘The era of the centenarians lived through where they benefited from better medical care and improved public health while living in a pre-modern lifestyle is coming to an end.’ With Dominica indeed vying for most obese in the Caribbean, if Dr. Boaz is right, some of us may live to see a historic swing in falling longevity. In other words, we could plummet from hero to zero in a generation or two.

Should we be trembling? Well, not if we focus on Ma Leonce’s legacy. Her birthday weather was glorious! His Excellency the President & Mrs. Saverin, Hon. Ian Douglas and Parl Rep Roslyn Paul were most gracious in adding their distinguished presence. A great time was had by all – except this little jarring note of discord. I think it is fair to say that separation of church and state is still a rather alien concept in Dominica. Nevertheless we could do better by avoiding exploitation of such public celebrations, weddings and funerals to promote party and doctrinal differences.If truth be told however, more people get turned off than get turned on, just saying. It behooves leaders therefore, to show a bit more discernment and sensitivity. Let us henceforth seize such opportunities to foster healing, inclusiveness and promoting the common good.

That is what more accurately reflects the essence of who Ma Leonce is. The Paix Bouche Village Council, church folks and cultural group were simply outstanding! The Dominica Council on Aging under the stellar leadership of the likes of Zetma Toussaint, Nigel Lawrence, Bernice Joseph and Sherita Gregoire and others continue to do great work on behalf of our seniors.  The psalm the birthday girl shared happens to be a family favourite. That made me feel right at home in Paix Bouche. I made lots of new friends and took time as always to big up our police officers who made things run so smoothly.

Dr. Martin Luther King famously declared that ‘longevity has its place.’In a way, Dominica lays rightful claim to that place. The steep climb to Paix Bouche traditionally forces walkers to ‘shut your mouth’ to concentrate on breathing. Today’s ‘King of the Hill’ race from the main road to the village honours physical fitness, honours Ma Leonce and helps secure the Nature Isle’s proud tradition as the place to be if you want to hit a hundred.

Dr. Sam Christian is a syndicated columnist focusing on health and related development topics. You may contact Dr. Christian on urgentcareda.weebly.com or by calling 767 440-9133