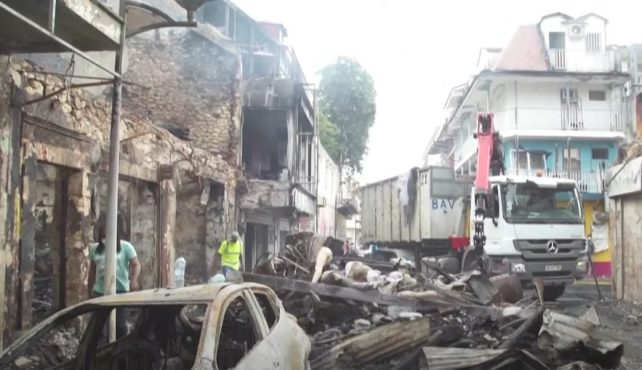 The situation in Guadeloupe is still tense, with more vehicles on the road and businesses timidly reopening and remaining open for longer hours, after the strike action which started on November 15, against mandatory vaccination and health pass continues.

The Trade Unions and the governing Councils, after 2 days of discussions have put together a list of concerns affecting the Guadeloupean population to begin discussions on Monday December 6. The trade Unions are also demanding an inter-ministerial delegation from Paris at the negotiating table.

They claim that contrary to the proclamation of the Minister for Overseas Departments, Sébastien Lecornu who said that most of the concerns brought up by the Unions are the duties and responsibilities of the Regional and Departmental Councils, a claim that both parties are denying, saying the State has the responsibility towards the overseas departments to the same extent that it deals with other Departments on mainland France.

But in a press release on Friday December 3, the government gave a mandate to the Prefects of Guadeloupe and Martinique “to deepen the dialogue with the the parties on the ground in order to collect their proposals and projects around several defined plans”.

The Unions have denounced this approach, as they had already called on their supporters to remain mobilized because the battle is not over. “If we are not getting the satisfaction to our demands, we will have no choice but to intensify our blockages,” Elie Domota, Spokesman for the Largest Trade Union, Union Générale des Travailleurs de Guadeloupe (UGTG), said while addressing supporters after a meeting with the Elected officials on Thursday December 2.

There have been no reports of looting for the past week. The 6 pm to 5 am curfew was extended for the third time to Tuesday December 7, with the exception of five Communes that were not impacted by the protest action.