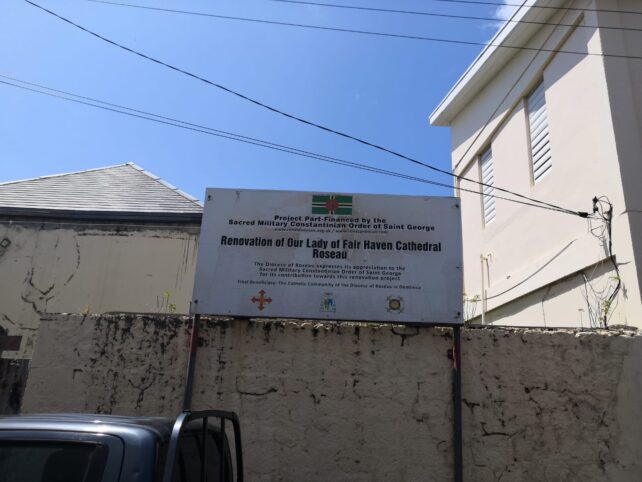 The Catholic community in Dominica is being urged to dig deeper into their pockets to assist the church to raise the EC 7 million dollars needed for the completion of the Cathedral of Our Lady of Fair Haven in Roseau.

“We have the money; it is in our pockets, and we have to go find it,” stated Monsieur William John-Lewis. “It’s in the pockets of all those listening to us, and all of us who have a feel for this place and a love for this place and understand what this place means.”

His remarks came while addressing the launch of the fundraising activities at the cathedral building last night which coincided with the presentation of a new book on the life of His Eminence, Cardinal Kelvin Felix, written by Justice Irving Andre.

Monsignor John-Lewis expressed “regret” that the project which first started in 2013 has taken so long, but says that non the less, it will soon be completed.

“The money that has been spent has not been wasted. I don’t think that many of us have an idea of how much work has been done here…but what we look forward to is that the day will come and soon, where we will rejoice at the work done and to see an even more beautiful more accomplished renovated cathedral of our Lady of Fair Haven,” he remarked.

Chairman of the fundraising committee, Val Cuffy, stated that while they have been receiving support, there is a greater need for efforts to be advanced.

“It seems like a tall order, but believe me, if we recommit ourselves, each of us sitting here this evening, we can make some appeal to our other friends, our Catholic friends, as well as non-Catholic friends, and we can bring this place to completion in a very short time,” Lelang declared.

According to him, upon completion, the Cathedral is set to be one of the “most beautiful buildings in Dominica,” and reiterated his appeal for the public to recommit themselves to its construction.

In the upcoming days, Letang says the committee will be engaging members of the 15 parishes to help develop fundraising ventures which will aid in advancing the construction.

“We will also be targeting our business people,  to perhaps make a contribution on a monthly basis as their interest and enthusiasm have waned, so we’re going to rekindle it. We will be going to our Dominicans in the diaspora and our catholic school alumni to see how together we can bring this house of God to completion,” he further stated.

Diocese Engineer for the Cathedral, Tarik Rolle, revealed that the project which was anticipated to be completed in 2015 is currently at lot seven out of seventeen.

Currently, the team is working on the fabrication of the timber, shutters and doors at $332 thousand as well as the retrofitting of the bell tower and spire estimated at $1.6 million.

At a press conference on September 14, 2020, former Bishop of the Diocese of Roseau, His Lordship Gabriel Malzaire, revealed that just over EC$3-Million was needed to complete the renovation work of the Cathedral.

“When we decommissioned the church in 2012, we thought that it would have taken about three years to be completed and then we would be back in the cathedral but it has not been so. The actual renovation project was very evolutionary in a sense as we moved along we saw more things which needed to be done,”  Bishop Malzaire stated then. He went on to note,  “So we started with a project that was simply the removal of the termite ridden roof to replace it at a cost of about 2.5 million dollars and that would be it, well that’s what we thought.”

Based on the last update provided by the former Bishop, now archbishop of the Diocese of Castries, about nine million dollars has so far been spent on the project.