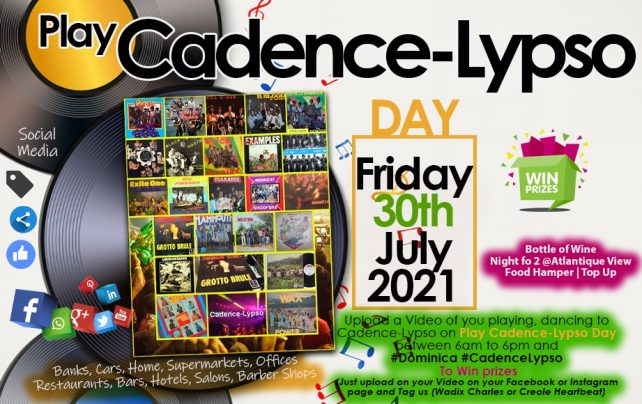 Today, Friday, July 30th is dubbed as “Play Cadence-Lypso day” in Dominica. This nationwide event is hosted by Creole Heartbeat in honor of Cadence-Lypso Month.

Tonight,  the fourth and final panel discussion for Cadence- Lypso month will take place at Alliance Francaise from 8pm. The main focus of this event will be on cultural tourism and industrial product.

The topics which will be conversed  are; “What did it mean for candence Lypso artists to be signed by major companies and distributed internationally” by MC Carthy Marie, “The introduction of copyrights and music publishing into the Dominican Music Space” by Michele Henderson, “How can we build a framework for successful music sector”  by Sobers Esprit, “The impact of cadence Lypso in the Indian Ocean” by Gilles Lionnet from the Seychelles and “From cadence to Bouyon” by Cornell Philip, Carlton, Winston and Derek “Rah” Peters.

There’ll be special guest performances from White Fayrie, Kalfa p, and Gregory Rabess, among others, who will be launching their brand-new songs.

The Prime Minster believes that this celebration is something that the ministry of culture should really take part in to sustain and preserve the country’s culture and unique features.

“Cadence lypso is what made us known as the place of music and culture and I think this move by Wadix must be commended and it has my full support. Next year it will give us more time to plan and to engage more stake holders and the government would like to be a stakeholder.”

Skerrit added that it is important to that while Dominica moves in other genres of music that we do not lose sight of who we are and what has made us known in the region and the world.

In today’s celebrations, the general public is urged to participate in competition to win a night for two at Atlantic View Hotel, bottles of wine credit from Digicel and a food hamper from Fine Foods Inc.

To enter, a video has to be uploaded on social media of someone playing or dancing to cadence lypso. Creole Heartbeat or Wadix SA Kai Malade also has to be tagged to the video via Facebook or Instagram.

“We are also encouraging the public to play cadence Lypso in their offices, cars, stores,  supermarkets bars, Salons and also all the DJ’s, announcers and radio stations to show solidarity to this International genre from Dominica,” Owner of creole Heartbeat, Leroy ‘Wadix’ Charles stated in an interview with DNO.

Charles stated that after July, he intends to have a comprehensive document to be presented to the government of Dominica and discussions with young musicians, DJs and entertainers.

“Were also urging the continued participation of the private sector as we aim to develop this movement into a tourism product and stimulate the increase of visitor arrivals to Dominica. We have also dubbed next year as “Cadence reunion 2022” as we invited Cadence lypso Legends, Lovers of the genre and stakeholders to return home during the month-long celebrations of July 2022.”