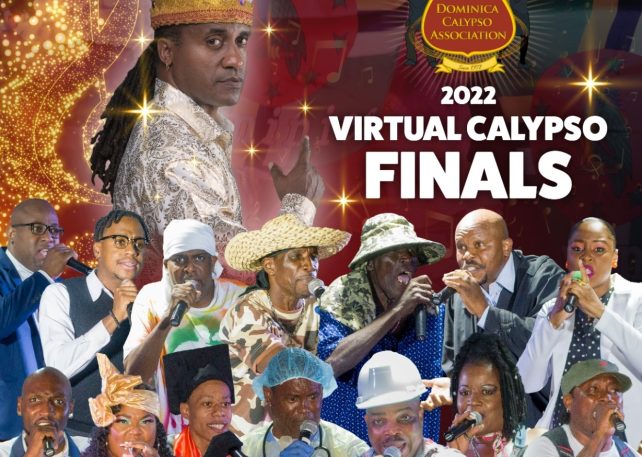 Reigning Virtual Calypso Monarch, Daryl “The Bobb” Bobb will have to stave off determined attempts by fourteen other finalists if he is to retain his title when the second edition of the Dominica Calypso Association’s virtual calypso competition is held this evening.

The show will be staged from 8:30 p.m. at the Evergreen Hotel, the season headquarters of the Dominica Calypso Association, but in-person attendance will not be allowed.

Patrons will be able to watch the pay-per-view live stream of the event on various online platforms and on TV.

Tonight’s show will culminate another virtual calypso season for the Dominica Calypso Association (DCA) which insisted when announcing its plans at the beginning of the year, that COVID-19 would “not kill calypso.”

The executive of the DCA promised, in the absence, at the time, of any word from the government on the staging of Carnival 2022, to give carnival lovers “a taste of Mas Domnik in a virtual style and ensure the country’s calypso appetite is first whetted and then satisfied.”

The association launched its 2022 virtual calypso season in January with two changes to the format that was used last year. The elimination round was brought back into the virtual competition in order, according to Public Relations Officer (PRO) of the DCA, Emanuel ‘Haxey’ Salamat, to honour the wishes of patrons and to enable “the lesser-known calypsonians to have their moments of fame.” Also, there was no quarter-finals round and the 15 selected from the eliminations competed against last year’s 15 finalists in the semi-finals round.

The fifteen finalists will face each other tonight in a one round, one-song final competition and among them will be the two reigning DCA monarchs – the virtual monarch, The Bobb and the official monarch, Jaydee- a situation which, based on the association’s desire to keep these two titles separate and apart, holds an uncertain future as long as COVID-19 continues to affect the normal staging of the calypso competition.

The Dominica Calypso Association has insisted that in keeping with what has obtained during the season thus far, all COVID-19 protocols will be stringently observed at tonight’s event.