On his first official visit as the British High Commissioner to Barbados and the Eastern Caribbean, His Excellency Scott Furssedonn-Wood is this week touring several of the United Kingdom funded projects in Dominica and is also expected to hold several high-level meetings over the next few days, all to strengthen  the bilateral relation between Dominica and the UK

During a press conference held Wednesday morning- Jan 12- Prime Minister Roosevelt Skerrit revealed His Excellency who is leading an eight-member delegation,  since his arrival on Jan 10 have met with members of Cabinet to discuss existing areas of cooperation between the UK and Dominica. He is also expected to meet with the  Chief Executive Officer (CEO) of the Climate Resilience Execution Agency for Dominica (CREAD), her Excellency Francine Baron.

“His Excellency will also meet with honourable Dr. Kenneth Darroux, Minister of Foreign Affairs, and Honourable Cozier Frederick, Minister for the Environment, rural modernization and upliftment. As a matter of fact, there will be a visit to the Kalinago Territory today [Wednesday],” Skerrit stated. “Later today Honourable Dr. Vince Dre Henderson, the Minister responsible for energy, will accompany His Excellency and his delegation on a visit to the geothermal plant in Laudat.”

On Thursday, the team will participate in the opening of a smart health facility in Grand Bay, retrofitted with funding from the UK.

According to the Prime Minister, since Dominica attained its political independence from Great Britain 42 years ago, the UK has remained one of the country’s most dependable development partners.

“We can refer to cooperation in many areas of endeavour to include education, health, agriculture, infrastructure, tourism, as well as support on gender and social issues. More recently, the United Kingdom has provided enthusiastic support of our climate resilience goals,” Skerrit said.” The UK is actively assisting to develop a strategy that will allow us to reduce our carbon footprint, strengthen our institutions, and infrastructure, and empower our population to anticipate climate risks and hazards and respond effectively to save lives and bolster communities,”

He said Dominica pledges to continue building the bonds of trust and cooperation that the two countries share and looks forward to more opportunities, to bring the countries and people closer, “united in a common goal of advancing livelihoods and improving lives.”

For his part, the High Commissioner pointed out the support of the UK has been very much in the spirit of “partnership ” and therefore, his visit this week is to celebrate the strength of that partnership and to look at ways in which it can be strengthened.

He said the 250 million EC dollars that have been funded to Dominica by the UK government was given to assist with development projects such as the upgrade to the water and sewage systems, road improvements, geothermal energy as well as climate-resilient health centres.

According to the British diplomat, support will also be provided to assist the young people through vocational training, technical training, to help disadvantaged youth achieve their potential and fulfil and play their full part in their societies and their economies.

“I hope all of these things are practical things, things that people will feel in their lives that people in Dominica will see the benefit of what you have done, and what we have supported you to do, in making these critical, critical improvements,” Fudderso-wood stressed…”So we’re looking at more things that we can do and further areas of cooperation, certainly finding new ways to, to build connections between our people and finding new ways to do business together, to trade.”

According to the High Commisioner, since leaving the European Union, the UK has been able to put in place a new UK Cariforum Economic Partnership Agreement which creates a host of new opportunities which better enables them to not only do business but to trade and export into other markets which he is optimistic Dominica can benefit from. 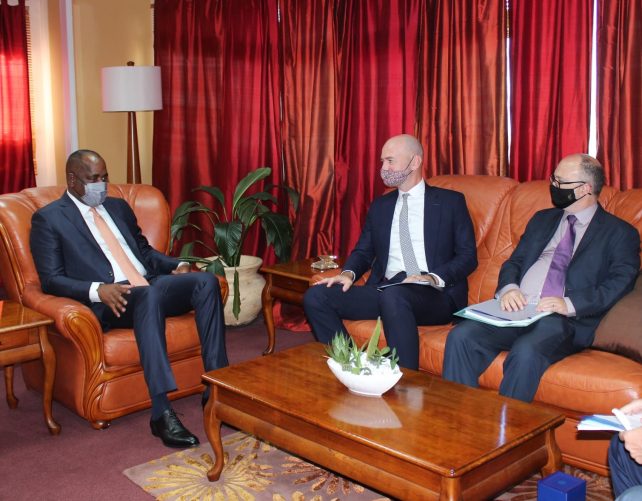