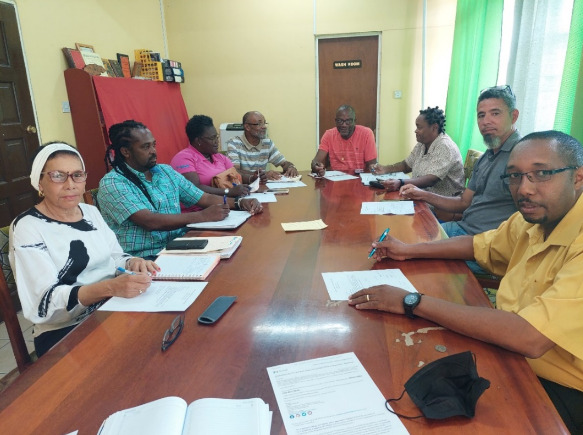 Unions in Dominica have made one more step towards greater unity and more effective representation of workers in Dominica.

Leaders of the Dominica Public Service Union (DPSU), the Dominica Association of Teachers (DAT), the Waterfront and Allied Workers Union (WAWU) and Dominica Amalgamated Workers Union (DAWU) at a meeting of Thursday April 28, 2022, convened at the DPSU building on Valley Road, placed emphasis on the tremendous work done by public sector workers and those in the private sector to respond to these events and to help Dominica in its recovery efforts. The Unions agreed that workers must be better valued and regarded, and Unions must reclaim the observance of May Day, reignite the labour struggle and inspire greater interest in the relevance and critical role of trade unions in the advancement of society.

The meeting agreed that the issues confronting workers in Dominica are too important for Unions to remain quiet, apart, or discouraged by failed attempts at greater unity. The Unions present decided that it was time for action, to seize new opportunities and to address the challenges affecting workers.

Other high priority issues were also discussed to include:

The Unions at that meeting made a commitment towards greater solidarity and collective action and with the endorsement of their respective Executives, agreed to a joint statement, and to meet again in one week to put in place a plan for more concrete action and establish a more formal arrangement to treat with matters of mutual interest.

We the Unions, congratulate and celebrate all our workers in Dominica and wish to acknowledge all the employers who value their workers and respect their Trade Unions as equal contributors to production, innovation, and advancement in Society.

Solidarity, Liberty and Fraternity and a Happy and peaceful May Day 2022 to all.