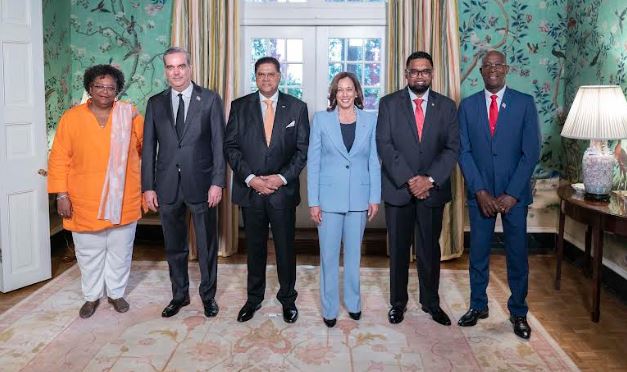 Barbadian Prime Minister Mia Amor Mottley was among a number of CARICOM leaders who met with U.S. Vice President Kamala Harris at the White House on September 15. Vice President Harris underscored the importance of the U.S.- Caribbean relationship and the United States’ commitment to the Caribbean in the areas of energy security, development and climate finance, and food security.

The leaders also discussed ways to accelerate implementation of the U.S.-Caribbean Partnership to Address the Climate Crisis, also known as PACC 2030, which was launched at the Summit of the Americas in Los Angeles.

Vice President Harris noted in her opening remarks, “… I will say, as I have said before, the relationship between the United States and the Caribbean is based on common bonds and interests. As neighbors in the Western Hemisphere, we believe it is critical that we have a relationship that is based on close cooperation, knowing that the result of that will be our shared prosperity and security…”

Since the Summit of the Americas in June, the United States has committed $28 million to provide food security assistance to the Caribbean. The United States will continue to work together through PACC 2030 and other initiatives to promote energy security, combat climate change, bolster food security, and encourage economic prosperity in the region.