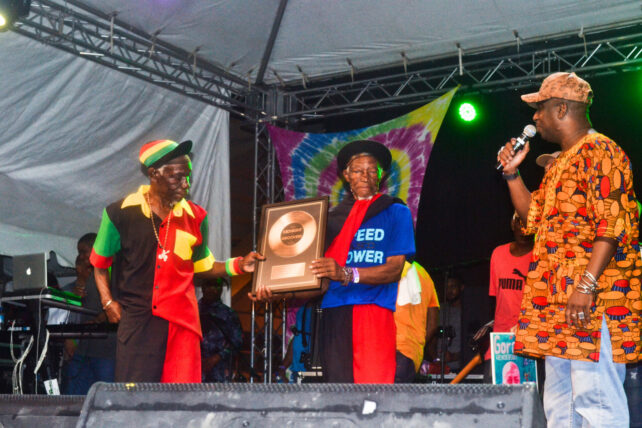 “We feel honoured, “said Chubby and Coe following night one of the Cadence-Lypso tribute festival (With photos)

Brothers Phillip “Chubby” Mark and Marcel “Coe” Mark, of the Midnight Groovers, say that they are humbled, following their recent recognition by Creole Heartbeat in the Cadence-lypso genre.

Friday night- July 29, 2022, officially marked night one of the cadence-lypso tribute festival which paid homage to the Grandbairian band who burst on the musical scene in the early 70s and was led by Chubby and Coe.

Following an over two-hour-long performance during which they received several awards, the duo told Dominica News Online (DNO) that such recognition only propels them to push the genre further.

“I feel great because for Creole Heartbeat massive to do that to me that is a good thing and I just want them to continue to do the good works because presently we are remaining in the music for the young people, to hopefully teach them about this aspect of our genre,” Chubby said.

Echoing similar remarks, Coe expressed hope that this event can be held annually as he says it would be an encouragement to other Cadence-lypso artists to develop themselves in the genre further.

Though the brothers highlighted that their past 50 years in the music industry have been filled with countless challenges, they acknowledged that it contributed significantly to their present success.

“Despite everything that we have been through, Cadence has been good to us and helped us a lot. That is the reason why we love the music. It is our music and we are so happy that we had the opportunity to spread it to the world for the past five decades,” Chubby stated.

As to what’s next, they revealed that in the upcoming weeks they are scheduled to play at numerous venues in the region and also have their eyes set on once again performing at this year’s World Creole Music Festival.

Four-time champ of the National Cooperative Credit Union (NCCU) Cadence-lypso competition Anton “White Fayrie” Joseph told DNO that he too felt humbled being able to perform on stage with Midnight Groovers, as they’ve played a pivotal role in his music career.

“I felt elated, I felt excited being on this stage with them tonight, as I’ve been a fan of theirs and have listened to their music from a very early age,”  the Grand Fond native said. “being there for that celebration of cadence is an indescribable feeling. It gives me a whole different vibe, a new level of motivation.”

Night one also included a lineup of several other artists including the energetic first Serenade Band.

Speaking of their opening performance, lead singer Lloyd ‘Lloydie’ Jno. Baptiste conveyed his delight to DNO that the crowd not only included older folks but several youths as well.

“As you know cadence is considered a predominantly mature age music and to see there was a lot of young people in the age range of 20, 21, 21, it feels very nice to see that cadence can co-exist with the younger and the older generation,” he said.

Commenting on the notion that cadence-lypso may be a thing of the past, the Manager of the band, who emerged on the music scene in 1984 Carton” Carlty” Winston issued a call to the authorities to take more action to help in the preservation of the genre.

“Dominica should be proud that it has two different genres of music. We have cadence and we have bouyon, but more impetus and emphasis have to be placed on cadence to keep it alive, because when you look at cadence it is just chubby, Midnight Groovers,  and they cannot be there forever, none of us will be here forever so we need to promote cadence more in Dominican because it is a very important genre,” he said.

“We have to do our best to keep the cadence alive, we cannot have two genres and kill one and keep that other alive, that doesn’t make sense. So we are really calling for serious action to be taken to capitalise on what is unique to Dominica which is cadence and let’s work together to give it more exposure,” he added.

Similar comments were also shared by Alfred ‘Pato’ Lewis from the 1979 Black Roots band who also showered praises on Midnight Groovers and the many others who advanced the genre.

“Cadence is not dead. All we need to do is keep it at the forefront, and we can all do so, particularly the radio stations, and I can assure you that we will witness the further growth of the genre,” he said following his performance.

Other acts for the night included Lobster, RSB, and the Sixth Form Sisserou’s Singers.

On Saturday evening which featured a tribute to the late Jeff Joe, the crowd witnessed performances from Luc Leandry, Dominica’s Lady of Song, Ophelia, Curvin Serrant, Linford John, Ecstasy Band, Chris B, and the Cadence All-stars.

Tonight features a tribute to Fitzroy Williams and patrons are being entertained by Williams himself, along with King Dice, Signal Band, Derrick Peter, Janet Azzouz, Gilles Fontaine, Jerry Lloyd, and the Cadence All-Stars.