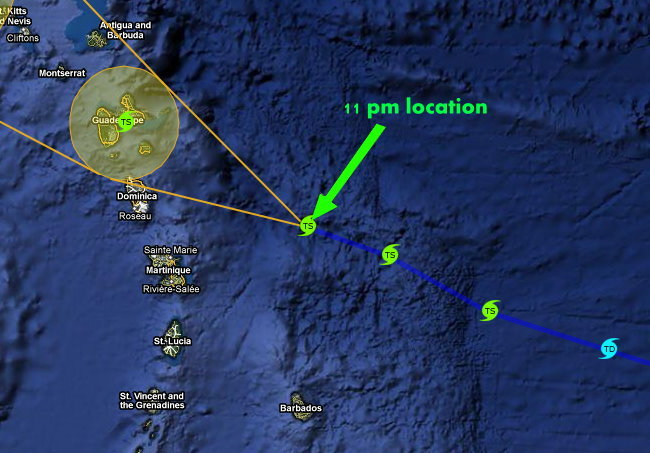 At 11 pm, the center of Tropical Storm Maria was located near latitude 15.1 north, longitude 59.5 west about 120 miles east of Dominica. Maria is now moving toward the west northwest near 14 mph and this motion is expected to continue tonight with a turn towards the northwest by tomorrow.

On the forecast track the center of Maria is expected to pass north of Dominica by  late tonight into early Saturday morning, accompanied by pockets of light to moderate showers, scattered thunderstorms and gusty winds. Maximum sustained winds are near 45 mph with higher gusts. A french buoy reported sustained winds of 39 mph during the past few hours.

Tropical-storm-force winds extend outward up to 175 miles mainly to the northeast of the center. Models are forecasting Maria to remain a Tropical Storm as it moves across the northern section of the island chain. Tropical storm warnings are in effect for Dominica and the islands north, through to Puerto Rico and a tropical storm warning is also in effect for Martinique.