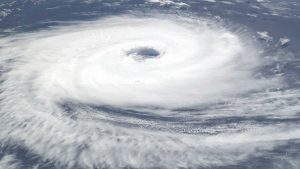 The 2016 Hurricane Season begins today with and the National Oceanic and Atmospheric Administration (NOAA) has forecast that there will be a “near average” season.

They predict there will likely see 10 to 16 named storms (winds of 39 mph or higher).

Of the named storms, they think 4 to 8 could become hurricanes and between 1 and 4 will develop into major hurricanes – Category 3, 4 or 5 with winds of 111 mph and up.

Included in their forecast is Hurricane Alex, a pre-season storm that formed over the far eastern Atlantic in January.

Hurricane researchers at Colorado State University have predicted that there will see 13 named storms (which includes Hurricane Alex), six of which will become hurricanes and two will become major hurricanes.

The seasonal activity is expected to fall within these ranges in 70% of seasons with similar climate conditions and uncertainties to those expected this year. These ranges do not represent the total possible ranges of activity seen in past similar years. These expected ranges are centered near the 1981-2010 seasonal averages of 12 named storms, 6 hurricanes, and 3 major hurricanes.

b. Reasoning behind the outlook

A main climate factor that influences the Atlantic hurricane season, called the Atlantic Multi-decadal Oscillation (AMO), sets the backdrop upon which other climate phenomena such as El Niño and La Niña overlay. The AMO results in Atlantic hurricane seasons exhibiting 25-40 year periods of generally above-normal activity (called a high-activity era) followed by 25-40 years of generally below-normal activity (called a low-activity era). At present, there is uncertainty as to whether or not the warm AMO and high-activity era for Atlantic hurricanes which began in 1995 has ended, and whether a cool AMO and low-activity era similar to that observed during 1971-1994 has begun.

Two other sources of uncertainty for this outlook are the rate at which the current El Niño impacts dissipate and the rate at which La Niña subsequently develops and intensifies. La Niña favors a more active hurricane season, and the Climate Prediction Center currently predicts about a 70% chance of La Niña during the peak months (August-October) of the hurricane season.

Because of these differing scenarios, there is reduced confidence in predicting whether the season will be above normal or below normal.