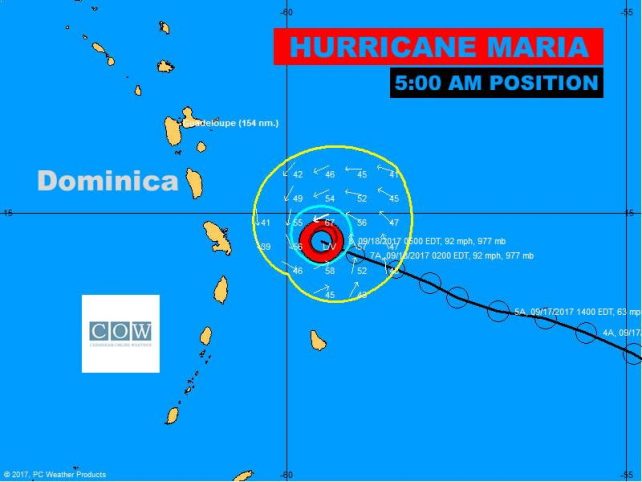 Hurricane Maria is heading towards Dominica and a Hurricane Warning remains in effect.

A Hurricane Warning means that hurricane conditions are expected somewhere within the warning area, in this case within 24 to 36 hours.

At 6am, Hurricane Maria was located near latitude 145.6 degrees north and longitude 59.5 degrees west or about 130 miles east southeast of Dominica.

A deterioration in weather conditions is already evident across Dominica and expected to continue during the next 24 hours with cloudy to overcast skies, moderate to heavy showers, thunderstorms and gusty winds up to tropical storm force and to hurricane force by this afternoon and rough to dangerous seas. This activity is expected to continue into Tuesday.

Expected rainfall amount for Dominica is between 8 to 10 inches (200 to 250mm) with higher amounts in elevated areas.

· Persons in areas prone to flooding, landslides and falling rocks are advised to be extremely vigilant and to exercise extreme caution as life threatening flash flooding and winds gusting to tropical storm force or higher are possible from Monday into Tuesday.

Swells generated by Maria have already started in the Lesser Antilles. These swells are likely to cause life-threatening surf and rip current conditions and coastal flooding.

A small-craft Warning means in this case that surface winds greater than 25knots and seas equal to or greater than 3m (10ft) are already affecting or expected to affect the marine area.

A High-Surf Advisory is issued when breaking wave action poses or is expected to pose a threat to life and property within the surf zone.

Mariners, persons living near the coast and other users of the sea should remain extremely cautious and make all necessary preparation to protect life and property and do not venture out of port. Sea bathers should stay out of the water.

The Meteorological Service will continue to monitor the situation and provide updates.