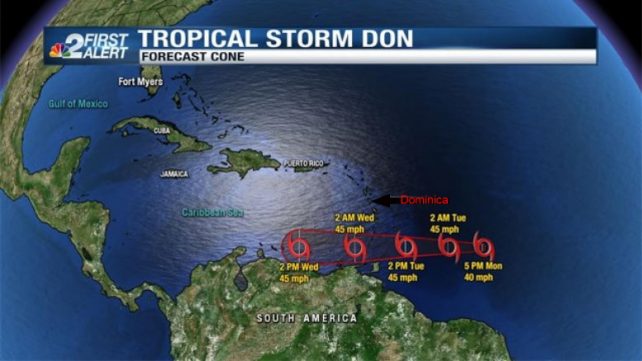 A low-pressure system located in the Tropical Atlantic just east of Barbados has developed into Tropical Storm Don at 5pm.

Tropical storm Don is located near latitude 11.2 North and longitude 52.6 West or about 485 mile east of Barbados.

Don is moving westward near 17 mph with maximum sustained winds up to 40 mph.

Don is expected to move mainly across the southern portion of the island chain by Tuesday into Wednesday and watches and warnings have been issued for some of the islands from St. Lucia and further south.

Tropical storm force winds extend up to 25 miles from the center.

Interests in the Lesser Antilles are advised to monitor the progress of this system and to take the necessary precautionary actions.

Regardless of development, this system is expected to generate showers and thunderstorm activity with gusty winds across the area late Tuesday into Wednesday.

Moderate seas are expected during the next 24 hours with waves peaking near 7.0 feet. Thereafter, an increase to peak near 8.0 feet is expected. Small craft operators and sea bathers, particularly on the eastern coast, should exercise caution.