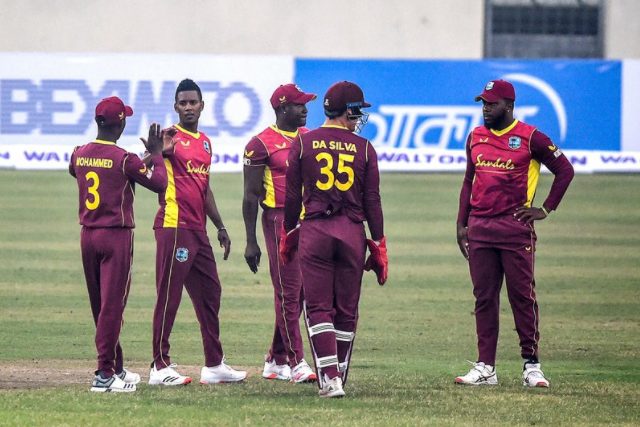 West Indies lost to Bangladesh in the first ODI on Wednesday ceding a 1-0 lead to their opponents in the three-match series.

The West Indies could only muster 122 runs in 32.2 overs facilitating an easy six-wicket victory by Bangladesh.

A shining spot for the Windies was Akeal Hosein who made an impressive start to his international career with a tight and penetrative bowling performance in the opening encounter of the three-match ODI series. The left-arm spinner took three wickets for just 26 runs off his 10 overs in a crucial spell of control and discipline.

For Pakistan, Shakib Al Hasan, who made a comeback post a ban, was superb with figures of 4/8 while in the batting department, Tamim scored a 69-ball 44 which included seven fours.

The left-hander became the first Bangladeshi batsman to score 950-plus runs against WI in ODIs (977).

The West Indies, on the other hand, never got the desired momentum with the bat and kept losing wickets at regular intervals.

The match was dominated by the spinners on a turning pitch — with 12 of the 14 wickets falling to the slow bowlers. It was the first encounter for both teams in the International Cricket Council’s ODI Super League. The home side secured 10 points for their victory.