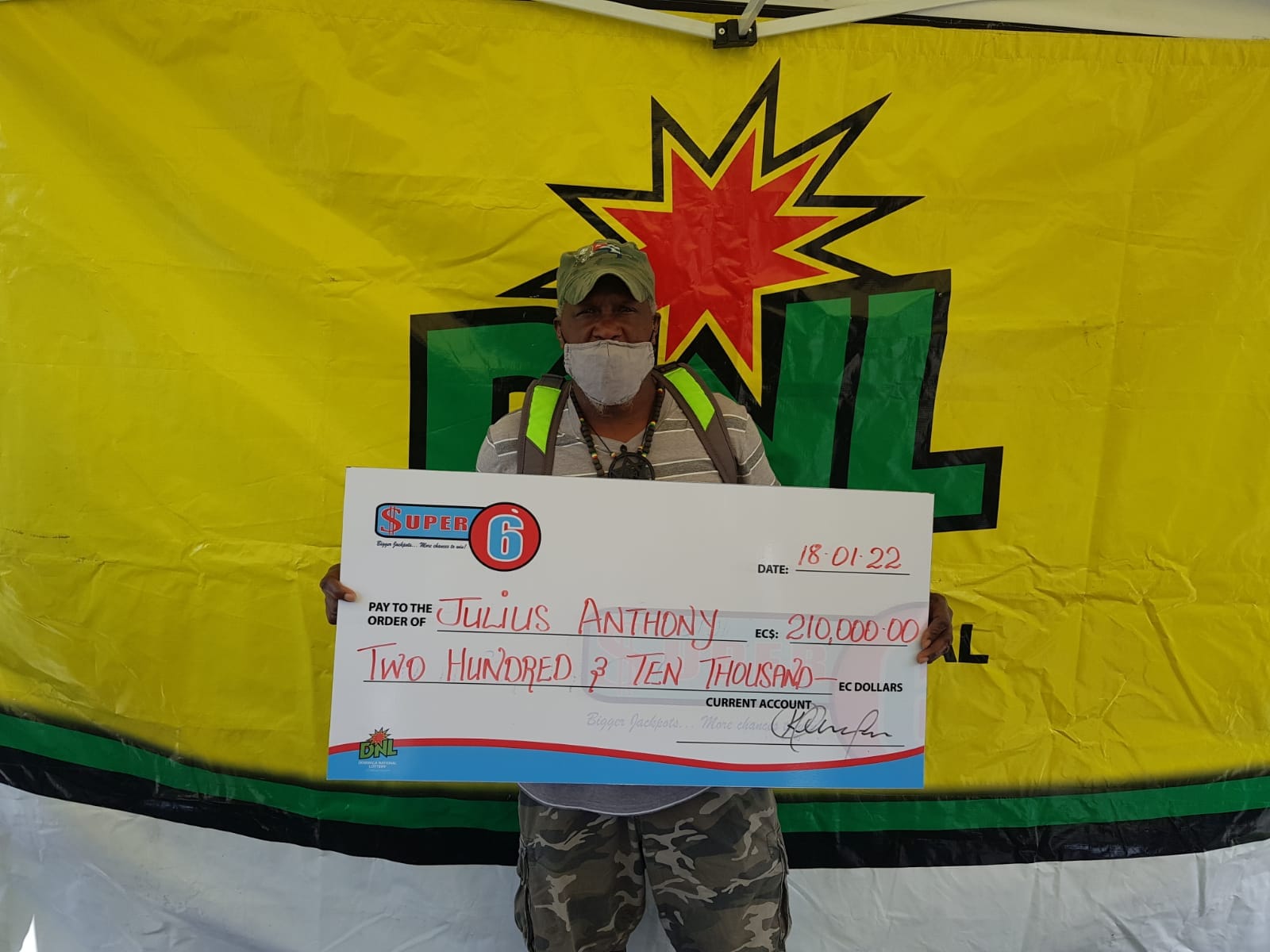 Popular radio caller Julius Tyrone Anthony, also known as ‘Blessings’ says that his Jackpot winning of EC$$210,000.00, came at a timely point in his life and will be used not only to purchase land and build a home for him and his family but will also go toward bettering his health.

On Tuesday 18th January 2022, the Dominica National Lottery (DNL) presented its first Super6 Jackpot of the year to Anthony, who hails from the community of  St. Joseph.

“I have been on the fringes of hell for a couple of years now with my health and I am giving so much thanks because that is so timely, so appropriate because it will greatly assist me,” he declared. “I want to give thanks because it is going to help me. I do not have land, I do not have a house, and I am still going through my health challenges, so I really want to give thanks for that timely winning which will help with all of that.”

Anthony, who’s an avid lottery player, says that he had just given up hope of winning the lottery, but decided to try his luck for a final time, and struck gold that day. He is therefore encouraging other players not to give up.

“Consider it an investment. You might play for years, and you’re finding you’re not winning and it’s just one time for you to gain your winning.  Because I really considered several times to just stop because I have been playing for years and I was not winning and when I was about to back down, saying this would be my last time, that same Tuesday I had a win,” he made known.

He went on to thank the general public for their financial and emotional support through the years noting that  “if it wasn’t for many of them I maybe would be a double amputee. So I give thanks to all those who have supported me in one way or the other.”

Meanwhile, the Sales and Marketing manager of the DNL, Ken George revealed that EC$4 million and EC$26 million was paid out in online and blast games respectively in 2021 and said that such is an indication that the DNL is investing in the Dominican economy.

As further revealed, in 2021 EC$4.9 million was paid out to Super 6 jackpots winners in Windward Island-St. Vincent and the Grenadines, Grenada, Dominica and St. Lucia – which the game is being played in, with Dominica capturing three of the nine jackpots.

According to him, the highest jackpot of $2 million which was won last month by a St Lucian national created a new set of players locally.

Referencing the story of a Dominican who last year failed to claim their winning of $110,000.00 which expired in December 2021, George urged lottery players to be on the alert this year by double-checking their tickets and to also ensure that it’s kept in a safe location.