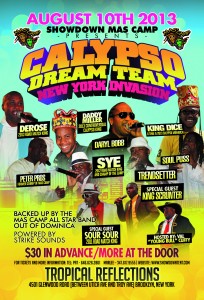 This weekend, Saturday 10th August, Dominican calypso lovers in the US are anticipating a thrill of a calypso show to be put on by the Showdown Mas Camp.

The artists will be backed up by The Mas Camp All Star Band, this time featuring some legendary musicians from the Caribbean such as Frankie McIntosh, Trinidad and Tobago’s leading arranger and keyboardist, Charles Dougerty from Jamaica and other Caribbean notables.

One highlight of the spectacle that patrons are looking forward to is the pre-release of Peter Prosper’s song for carnival 2014, entitled “You Marry Behind Our Back”.

His radio prerelease on The Hot Seat last week, has already caused a stir among calypso lovers.

Peter Pros is known for his satirical lyrics.

A sensay costume appearance will also be part of the entertainment and a Bello products basket will be raffled from purchased tickets.

Tickets for the show are available for advance purchase at various locations in the US and online at www.islandeventtickets.com or call 347 617 9555 for more ticket information.

Patrons who are unable to attend can purchase online pay per view tdnentertainment.net, or via link from Dominica News Online (DNO).