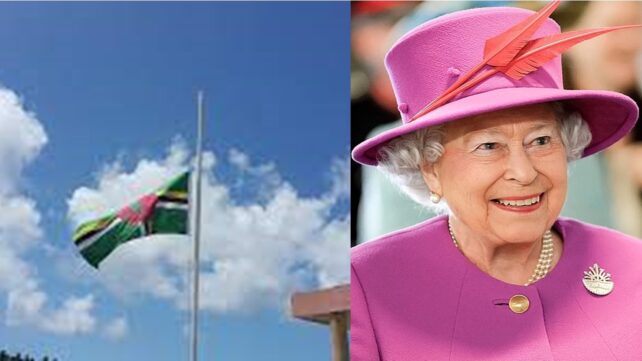 The Government and people of the Commonwealth of Dominica mourn the passing of Her Majesty Queen Elizabeth II who died on Thursday, September 8, 2022.

Prime Minister, Honourable Roosevelt Skerrit has conveyed condolences to the Royal Family and the Government and people of the United Kingdom.

“Her Majesty Queen Elizabeth II inspired respect around the world and conducted the affairs of the Commonwealth with grace and dignity for 70 years. Her passing marks a profound loss for the Commonwealth of Nations and the world. On behalf of the Government and people of Dominica, I extend deepest condolences to His Majesty the
King, The Queen Consort, the other members of the Royal Family and the people of the United Kingdom.”

In a show of appreciation and respect for the life and contribution of her Majesty Queen Elizabeth II, Dominica will observe two days of national mourning on Monday, September 12 and Tuesday, September 13, 2022.

As a further mark of respect, flags on all public buildings in the state will be flown at halfmast on the days of mourning.