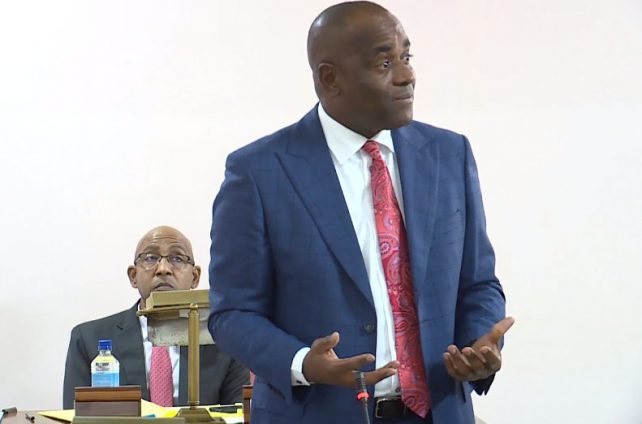 Prime Minister Roosevelt Skerrit continues to be heavily criticized by a section of the populace including opposition forces for calling snap elections in Dominica.

After two and a half years into his term, the Prime Minister on Sunday, November 6, 2022, announced a snap election scheduled for Tuesday, December 6.

The news did not sit well with the opposition whose leader had recently resigned and the process of choosing a new party leader was scheduled for the delegates’ conference on Sunday, November 27, 2022.

“I am a villain for calling elections in Dominica when I choose, but Timothy Harris in St Kitts collapsed his own government in two years and he is a gentleman,” Skerrit argued. “I am a villain for calling an election under three years in Dominica, but Sister Mia Mottley in Barbados is a genius for having called a snap election and even in a shorter period than I have done.”

He continued, “All of a sudden all sorts of strange things would happen in Dominica.”

Skerrit added, “Because the opposition has stood out from the elections, why is it that people believe that Dominica and Dominicans are incapable of acting and behaving normal?”

The Prime Minister said he takes great offense to that action and attitude towards “us in Dominica.”

Furthermore, he said he doesn’t believe that giving a party 21 seats in Dominica puts democracy at risk.

“Giving one party 21 seats in Dominica puts democracy at risk they say, but a party in Grenada won all seats, not once, not twice, but three times over the years, and democracy has never been under threat in that country,” he remarked.

He went on to state that the incumbent government in Barbados has won two successful elections with a clean sweep of the Parliament on each occasion and, “democracy is not under siege there either.”

“But in Dominica, an opposition party that has lost five consecutive general elections chooses three years into the term to get rid of its leader, to break itself into fractions, and to choose leadership candidates who are not from the people, not of the people, or not for the people and I am a villain for calling an election when the opposition has its hands off,” Skerrit argued.