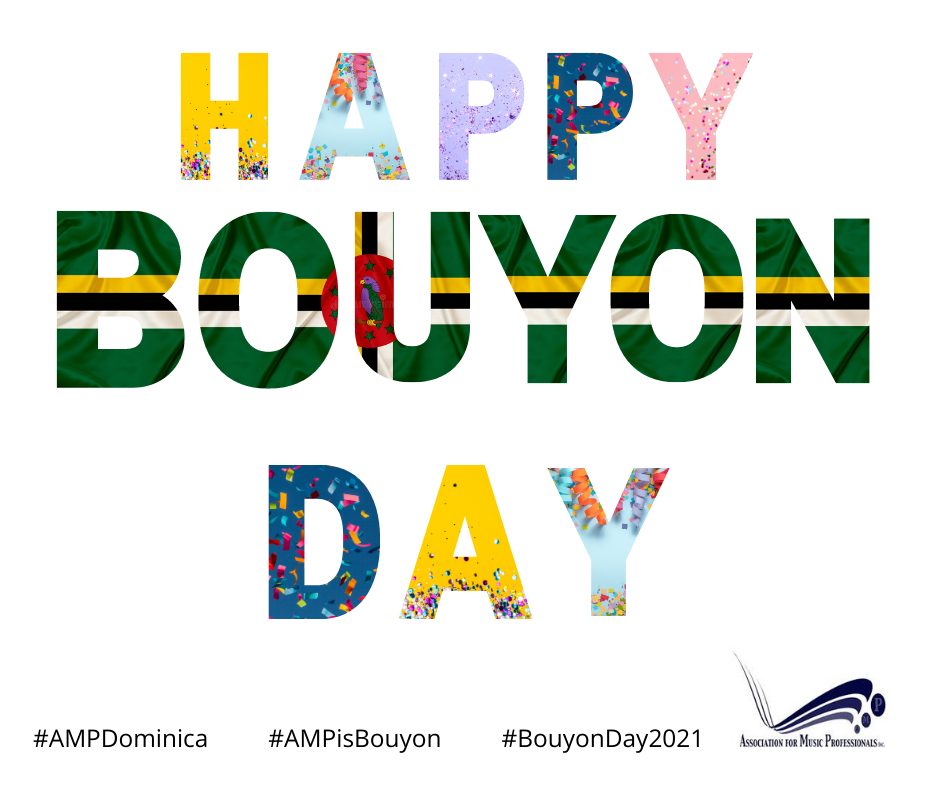 The executive of the newly revamped Association of Music Professionals (AMP) extends Happy #BouyonDay greetings to all lovers and practitioners of the Dominican musical genre. The new executive (elected on January 30, 2021) is making a special appeal to everyone to celebrate this special day and the Carnival Season virtually.

“With the presence of COVID-19, it is a different Bouyon Day than we anticipated but nevertheless, we encourage all Dominicans and fans of Bouyon music around the globe to celebrate this special day in a safe and responsible way- preferably inside, enjoying virtual sessions with close family and friends,” says AMP President Sheldon “Shelly” Alfred, lead vocalist of the Signal Band.

The Association also encourages the media in particular to support Bouyon music by playing songs on all media platforms and promoting as many different bands and individual artists as they can.

“This is an opportunity to highlight new acts and feature old favourites,” says Board member and Bouyon producer Arade “Maskman” Moses. “Where we show appreciation to the bands, artists, producers, who work tirelessly for the community of this indigenous, home-grown sound.”

Bouyon Day is celebrated each year on the Tuesday preceding Carnival Monday and Tuesday and was started in 2015 by then Advertising and Promotions Officer of the Dominica Festivals Committee (DFC), Val Cuffy and DBS Radio as a way to promote the genre.

The WCK Band has been credited with pioneering the sound in the 80s, which has evolved to include several styles and even be incorporated by artists in other Caribbean islands including St. Lucia, Guadeloupe and Antigua.  Major regional acts who have adopted the Bouyon sound in their style include Trinidad’s Machel Montano, Motto of St. Lucia and Bajan star, Rupee.

Formed in 2008, AMP is a representative body for music professionals with the aim of forming partnerships and building capacity among members, educating members and the public about the music industry and strengthening national identity through the promotion of local music.

AMP encourages any music professional who creates Bouyon Music, if you have not done so to join the Association. To find their application form and keep up with developments within the music and entertainment please like the organisation’s Facebook page www.facebook.com/AMPDominica

The public is encouraged to use the hashtags #BouyonDay #BouyonDay2021 and #HappyBouyonDay when mentioning this special moment on social media.