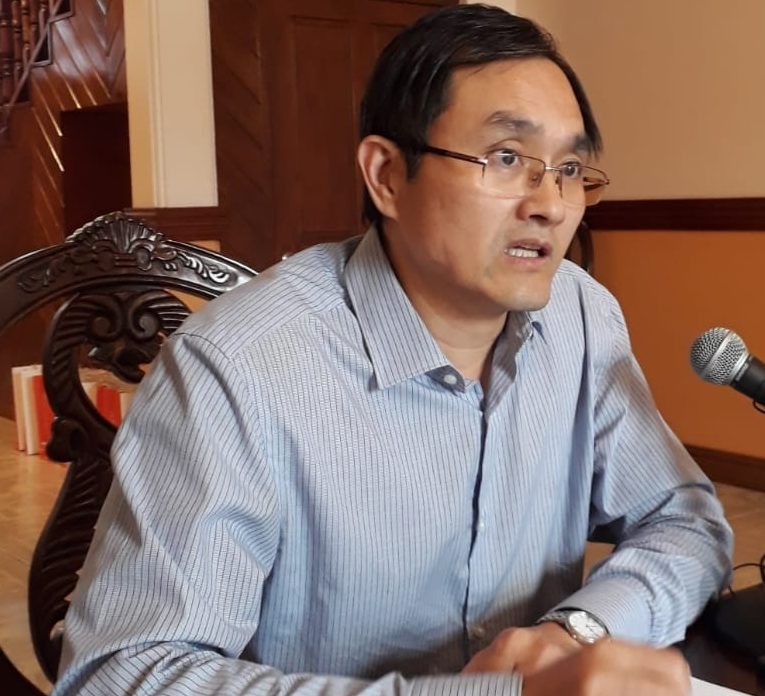 Charge D’affaires of the Chinese Embassy in Dominica Mr. Luo Songtao has told the Dominican public that “there is no need to panic” due to reported cases of the much-talked-about Novel Coronavirus – “We will win the battle”.

He was speaking at a press conference held at the Chinese Embassy in Morne Daniel on Tuesday, on China’s efforts to combat the deadly virus.

He said millions of people around the world are concerned about the outbreak of the Novel Coronavirus, however, there have been no reported cases in the Caribbean at this time.

According to information from the National Health Commission as of yesterday, China has reported 20,438 confirmed cases, 23,214 suspected cases, 2,788 severe cases, and 425 fatalities. Also 632 cases of patients have been cured and discharged from the hospital.

“There is no need to panic,” Songtao said. “We are confident that we will win the battle. We have taken extraordinary measures… we have full determination, confidence and capability to win this fight against the epidemic.”

“The situation remains challenging with more than 20,000 confirmed cases.”  he continued.

He then highlighted “China’s institutional advantages and previous useful experience, and with the strong scientific, technological and material foundation accumulated over the past 70 years.”

He said the problem is expected to be “curbed” in the next few weeks.

Songtao said further that the prevention and control of the outbreak of the Novel Coronavirus is the most important and urgent task for the Chinese Government since lives and health security are always put first.

He went on to say that under the direct leadership of President Xi Jinping, China has put in place a nationwide mechanism and taken the most comprehensive and rigorous measures to contain and mitigate the outbreak, “many of them go well beyond the requirements of the International Health Regulations.”

“At the same time, China has been conducting international cooperation in an open, transparent and responsible manner. We have released information to the [World Health Organization (WHO) and relevant countries at the earliest time, identified the pathogen and shared genetic sequence of the virus in a record-short time,” he explained.

Songtao added, “Attaching great importance to the safety of foreign nationals including Dominicans in China, we keep foreign embassies and consulates informed through various channels and work hard to address their difficulties. China’s responsible action and contribution to global public health security have won full recognition of WHO and countries around the world.”

“All of China is in action, sparing no effort to save lives and curb the spread of [the] virus. By doing so, China is not only protecting the health of its people but also that of people around the world,” he stated.

Currently, two new hospitals have been built in China and put into use with 1000 beds and 1500 beds respectively.

China has extended the Spring Festive holiday and postponed the start of schools and businesses. Moreover, the Chinese government has decided to send chartered flights to bring back overseas Chinese citizens of Hubei Province directly to Wuhan.

With strict measures controlling the movement of people, the momentum of the spread of the virus is being curbed inside and outside China. Songtao believes, that all of these encouraging developments show that the epidemic is preventable, controllable and curable.

Meantime, Songtao advises (Chinese) people that if it’s not urgent, refrain from traveling to and from China and Dominica.

He made it clear that there is no travel-ban placed on traveling from China to Dominica or from Dominica to China (thus far).