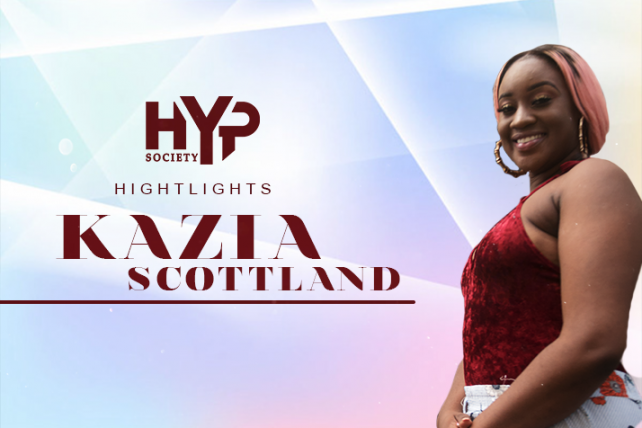 Note: HYP (Hard-working Young Professionals) is a group of young professionals with the aim of creating networks that will develop the country. Each HYP highlight will recognize at least one such professional and describe their accomplishments, successes and aspirations.

HYP Highlight “Being successful is a state of mind”

At the age of 22, Kazia Shillingford – Scotland has accomplished what many individuals lack the courage to pursue. Locally known as the “Dancehall Queen”, Kazia is no stranger to entrepreneurship.

Whilst most of other high schoolers were busy trying to coax money out of their parents to buy meat pies or top-up, Kazia was busy earning an income. With an excess of school supplies at home, she decided, that the best way to get rid of them, was to sell them to her peers. Her mother had suggested that she give them away but Kazia’s mind was on the money. She supported her enterprise with an extensive advertising campaign at school and diversified her range of services to include stationary rental. “I opened an account at the school and saved the money that I made from the sales of my school supplies in that account.” Being in such a small environment, word spread and soon enough the teachers found out about ‘Kazia’s School Supplies’ and her entrepreneurship spirit got her suspended.

Surviving as an entrepreneur requires unbridled passion, enthusiasm and a certain naivete in the face of many unknowns, and this trailblazing young lady was not done yet. Though she received a lot of discouragement from many family and friends Kazia decided that she wanted to start a business. With the support from her parents and advice from her mother, she began small and started selling waist trainers and hair extensions from home. The demand for her product began to grow to the point where customers came to her place of employment to pick up their orders. The rapid growth of her business eventually caught the attention of her manager and Kazia was advised that she should establish a physical location.

Using the profits that she made from her sales at home in addition to assistance that she received from the NDFD she officially opened her store in 2015.  Kazia changed the game and the way hair was sold. Her personality, popularity and personal fashion is the driving force behind her success. Since the launch of ‘Toujour Haute Couture’ the number of competitors in her field has been growing steadily. Dominican women have started investing in human and coloured hair. It can be said with confidence that Kazia has started and impacted some trends when it comes to hair, though many may not want to concede to that.

Opening the store, “I started from scratch, with nothing and I actually had to borrow a showcase.” She gradually added things as she went along determined not to lose focus or to get discouraged but to take every mistake as a lesson. Along the way “ I have learned to manage my money, knowing who is for me and, who are the right people to have around, and that nothing needs to be rushed because everything will happen on its own time, once you have God.”

The entrepreneurship path is strewn with aspiring entrepreneurs who give up at the first tough challenge, are quick to make excuses or burn themselves out in stubborn desperation on a broken objective, and this resilience to recover quickly from a setback, pivot and charge ahead is invaluable for an entrepreneur. “There were times when things were hard. Nothing prepares you for running a business. Erika hit me hard after my first four months of opening the store and I lost $10 000 worth of products at the airport.” Kazia shared. That experience taught her to limit the number of products she orders in bulk and to take necessary precaution during the hurricane season. The passing of Hurricane Maria also taught her to safeguard her physical location. When asked how she deals with the negativity, her method is simple. “I block it out and make it a practice to shut down conversations that contain negativity.”

“Being a boss is about constantly improving, adding, and maintaining your business.” Says Kazia. With that mindset, her goal is to eventually become a business mogul and help other young entrepreneurs along the way.

Some may say she will never do it, or that her goals are too big, but after having a sit down with this amazing young lady I think she’s halfway there. Kazia shows no sign of slowing down as she is about to launch another store “Haute Queens” in St. Maarten. In addition, she is working towards having an outlet in every Caribbean island and also wants to widen her service offerings to include hair installation.

At this point in her life, by every measure of success, Kazia is successful.  She likes to believe that ‘success is a state of mind’ and doesn’t consider herself successful yet. She thinks that she is growing more comfortable as she progresses, and time passes.  In the spirit of constant self-improvement, it is in her plan to go to college and get a degree in Cosmetology.  At this present moment though, she is doing courses on putting frontals and closures as she plans to expand her business.

Many people already have a preconceived idea of who Kazia is. This she attributes to her prominent public profile. She has been met with negativity, but the outpouring of support overpowers the noise of the ‘haters’. Whilst speaking to her I only see an outgoing, friendly, open-minded hustler, in the pursuit of success. In the words of Kazia ‘don’t expect a caterpillar to understand the dream of a butterfly’.