(Viewer discretion is advised). It always lay in the driveway to welcome her, that stray, outside cat, better known as Puss. It would dutifully move out of the way as she slowly drove up. Once she exited the vehicle, it promptly cameto rub on her leg in that trembly,purry way. And unless she gently scratched its forehead and petted its back, it would jealously hinder her from entering the house. Not that she was particularly fond of cats, but that became the signature that she was really back home – whether from a quick run to the grocery store, or from a long trip abroad.

One day she heard a sickening crunch she would never forget! She slammed on the brakes, rolled down the window and peered nervously outside for Puss. Then she heard a soft, mewing, hissing sound. She sprang out of the car. Puss’ head was lodged under the front right tire.

She jumped back into the car and reversed with a screech. Her husband burst out of the front door.

“Oh no…She was so sick this morning, I carried her by the side of the driveway to greet you….” There wasmomentary flare of blaming each other. This was quickly replaced with profound sadness as they grappled to understand this unnecessary tragedy.

“Oh God – and she must have dragged herself to her usual spotand was too weak move away….”

Puss was barely twitching. With no Casualty for pets, they began the gut-wrenching task of making her comfortable. They gently scooped her up from the bloody mess and placed her in a cardboard box on the porch. They poured a bit of peroxide on her head wound and covered her with that favourite scrap of blankie. They placed some food & water next to her and resigned themselves to the death-watch.

Day # 1: No movement. They changed the food and water

Day #2: No movement. They changed the food and water. 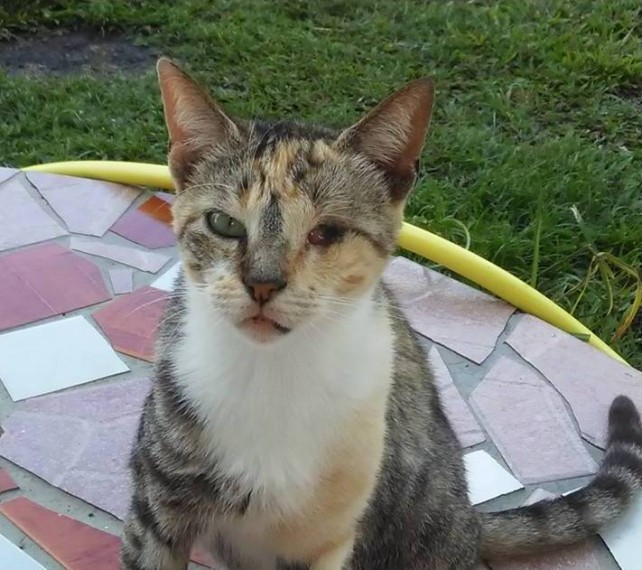 Today, Miracle Puss is as any other cat. Puss’ patrol of the porch and driveway remains standard operating procedure. You would never know what trouble she’d been in, except when you look closely at her face. When I visited, Puss purred on my leg too. I reached down to pet it, and was taken back a bit, thinking the poor thing must be suffering from some eye infection.

“What’s his name? Jack Sparrow?!” I inquired lightly, referring to the missing left eye. Ailas! Then, I was sorry I asked. And then I was not…

I mean, I was touching aliving, breathing version of the Easter story. Indeed, all our righteousness is as filthy rags. We have all gone astray. The God of the universe, we are told, clothed in human flesh to make Himself a sacrifice for our sins. And on the third day…well, you know the rest of the story.

I don’t know about you, but it’s hard for me to wrap my head around the enormity of it all. My scientific mind cannot grasp that salvation equation. But by faith, I personally accept it and I move on. I move on, not to argue with others who will go to hell, the exact day of His return, or the size of the mansion He said he was going ahead to prepare for us.

Our job should be like that family: doing those things we know best how to do–for that stray cat and others. They braced for the worse and proactively hoped for the best. At times,our island home seems anything but a “common wealth” The Brussels bombing once again dramatizes how perverted religion has it all so wrong. Thank God that Dominicans don’t believe in blowing up the brethren to convince them how merciful and Almighty God is. Nevertheless, we do seem to major more on those things that divide us.

The miracle of Easter is the greatest love story ever told. It is a story that demands more than preaching or witnessing. We enlarge our circle when we do unto others, as we would like them to do unto us. Every honest person admits that they know of many religious people who are simply horrible. They also know many ‘unbelievers’ who are just so precious and kind. This being the case, may part of our Easter duty be allowing ourselves to be led by the Spirit, to reach out to those who do not believe as we do –and reveal to them the true face of God!

Dr. Sam Christian is a syndicated columnist focusing on health and development issues. He can be reached at 767 440-9133, onFacebook, or logging on to https://urgentcareda.weebly.com