A heavy pall of grief hung over the island as news filtered out of the true scope of the unimaginable tragedy. For Health Minister, Dr. Kenneth Darroux, it was personal. Word was that many Petite Savanne victims were close relatives. He was distraught not being able to render assistance. He was inconsolable about not being able to get there; in his family’s time of greatest need. 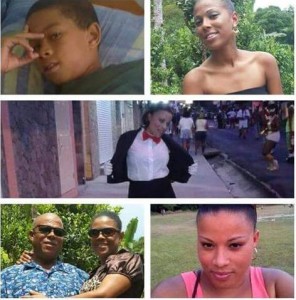 Days before, the center of downgraded Danny had passed right over the island. Dominicans yawned. We made monkey faces at that weather system, “What kind of stupid hurricane is that?!” So when a windless Erika headed well north between Guadeloupe and Antigua, no one I know off said, “Hey, watch it. David fooled us before…”

Erika was a big girl, basically blanketing the better part of the Lesser Antilles. If there was to be any trouble, we reasoned, someone else was in well line to get worst of it. But Waitikubili’s tall body was better at catching the moisture and many of her 365 rivers long wanted to prove that they were not downgraded to sleepy streams.

Case in point, Coulibistrie River not only burst its banks but barreled down the center of the village. Likewise isolated, village council chairman frantically reported that not one wooden structure was left in its path. An incredible for a small village, 50 vehicles were swept to sea. In fact, pictures of rides tossed about and in some cases, stacked three high, was reminiscent of the epic tsunami proportions. As the deluge brought deadly landslides crashing down, Noah must have mumbled, “This is déjà vu all over again.” Tons of silt, stone and tree debris half-buried houses and highways all over the island – in designated special disaster areas and beyond.

How many selfless acts of heroism took place in the torrents and tumult, we may never know. But if ever there was one it would be 55 year-old Simon Robin from Marigot who gave his life fighting to divert floodwaters from the airport. The river won. The facility in now totally out of commission. And even if it were not, transit to Portsmouth or Roseau remains cut-off in multiple locations.

Clifton and Billy Lewis were among the first confirmed victims of Erika, though tantalizing rumours of their rescue lingered. We would often ‘ail each other as I cut across Government Headquarters or as he walked his daughter Nakisha to school from their home in Bath Estate

We had grown up together in the Boyd’s Avenue/Fire Brigade/Windsor park area. His big brother grew up to be the cherubic little man who clashes the cymbals for the Music Lovers Government Band. The creative Clifton was always tremendous source of encouragement to many. Just the afternoon before Erika, ‘Mighty Cacoa Tea’ and I knocked fists under ministry. He was looking sharp with this vintage huge smile on his face. As I made my way east to Bath Road, he was briskly marching west toward Treasury, toward the sunset, toward a shared destiny with his beloved brother Billy.

It is a extremely weird feeling tracking a weather system for days, not knowing if it will actually come knocking – and if it does, whose names may be on its list. This revives the age-old debate as to whether people die before their time, or whether God gives us more than we can bear. Either way, I have no doubt that, at least before ‘memoire poule’ sets in, we all will be paying closer heed to Met Office warnings. That cannot prevent much of the awesome destruction unleashed upon us, but would definitely subtract from the body count.

The irony of it all: for David over three decades ago, all my family was home and I alone was in the States. For years I bore the burden of a kind of guilt complex not being there to suffer with my people. Today, I am the only one home and the rest of the family is in the States. So I know the desperation from afar for the welfare of loved ones. I know that restless impulse to help, to do something, anything. It matters not that we are in the era of Facebook and Whatsapp, where graphic pics and videos circulate almost in real time. When the next major disaster strikes Dominica, you never know where you might be.

Churches this weekend and students next week will start with a profound life lesson on ‘here today, gone tomorrow.’ In Standard V, I remember writing a composition on “Water, A Good Servant, But a Bad Master!” Erika mastered us for a day, but Dominicans came storming back. Like the cross still standing at the Berean Church next to the weakened EC Loblack Bridge, our resilient faith propelled us into action.

We were less shell-shocked than after David. Don Corriette’s Office of Disaster Management is well organized. But let us take a hard look on how we can improve. Fire and Rescue Services, Community Emergency Relief Teams and Cadets medic units need better communication equipment. They need pre-positioned first aid supplies and to be more self-activating. We need additional civil engineering consultation to improve bridges and infrastructure. Most of all, we must deal with the glaring root causes of our emasculated Public Works Corporation.

If there’s one gift Erika left us is unprecedented cooperation. The Prime Minister in his heartfelt speech called for reconciliation for reconstruction. Opposition leader Linton demonstrated great statesmanship when invited to speak at the Nation’s Station. Deputy PM Blackmore held the ship of state with a steady hand during those frightful early hours. Parl reps were on the frontlines interceding for their communities. Yet, many subordinates did not get the memo and evidence of tribalism still pervades relief efforts and who gets what. Program Director Shermaine Green Brown and her round-the-clock team of DBS announcers were the glue holding the nation together. It was remarkable how journalists Carlisle Jno. Baptiste and Curtis Matthew shared the same microphone in a civil and constructive way.

Friendly nations have rushed in with helicopters and rescue personnel. But every individual can help in some way. Dominicans, wherever they reside, are setting up funds for transportation of relief supplies. Do not miss that opportunity to enlist help from your houses of worship, universities, neighbours, service organizations and workmates. For families with dependent children, Cadets medics will be collecting ‘Care-Backpack’ jammed with tinstuffs, exercise books, pens, pencils, Band-Aids, toothbrush toothpaste, soap washcloth etc. Locally, please contact Cadet Headquarters at 440 7242 or Cadet Welfare officer nurse Cecilia Robin. Overseas, you can start by logging on to  Caribbean Agricultural Network for further information.

The Psalmist could have been speaking about Erika in the 46th chapter:

God is our refuge and our strength, very present help in time of trouble. Therefore we will not fear though the earth be removed, and though the mountains be carried in the midst of the seas. Though the water thereof roar and be troubled…”

As we reflect on Petite Savanne, we appreciate what is truly important in life. As we mourn, let us seize this is golden opportunity to rebuild Dominica stronger. God placed you where you are for such a time as this. Let us support Dr. Darroux who continues his tireless leadership in binding up the nation’s wounds despite his own tremendous loss. And with other weather events on the horizon, we earnestly cry out to the Almighty, “Rain, rain, go away. Save us again another day.”

Dr. Sam Christian is Medical Officer of the Dominica Cadet Corps. He can be reached at 440-9133 or logging on to the Urgent Care website urgentcareda.weebly.com