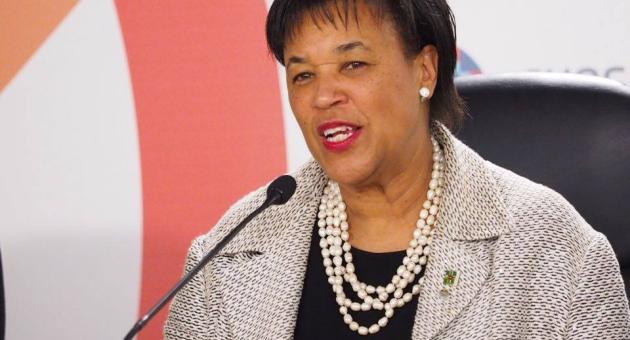 Dominican born Baroness Scotland-the Secretary-General of the Commonwealth has been facing mounting pressure to resign according to reports in the daily mail.

About five days ago, a campaign started to have her removed because according to her opponents, Baroness Scotland, was playing ‘the Meghan card’ – a reference to claims that criticism of the Duchess of Sussex is partly related to her colour.

She was also criticized for alleged lavish spending and an auditor’s report last week castigated her over a £250,000 commission paid to a firm run by her fellow Labour peer Lord Patel.

This week Australia joined the revolt against her leadership of the Commonwealth.

It cut nearly £500,000 in annual funding for the group’s secretariat and said it would refuse to hand over the remaining £250,000 payment unless there was a financial shake-up.

Her four-year stint as secretary-general ends next month and Boris Johnson is leading moves to deny her a second term.

The Daily Mail revealed last week that Australia was considering pulling the plug on the secretariat.

The decision was confirmed yesterday by foreign minister Marisa Payne whose spokesman said the funding cut was in response to the auditor’s report and its criticism of Lady Scotland.

Miss Payne was furious last year when she discovered Lady Scotland had invited world leaders to a cricket match in Australia without first informing the government in Canberra.

She complained in writing to Lady Scotland, accusing her of lacking ‘basic courtesy’ and ‘inappropriate’ conduct.

The move by Australia is the latest in a series of setbacks to the 64-year-old baroness including being forced to close a ‘Commonwealth Hub’ in London as a result of the secretariat’s cash crisis. Dedicated to the Queen, the centre had been open for only four years.

New Zealand has axed its annual grant of nearly £2million saying it had ‘no confidence’ in Lady Scotland. And similar reasons are reportedly behind Canada’s refusal to re-instate Commonwealth funding axed in 2013 – despite pleas by Lady Scotland.

A crisis board meeting of the Commonwealth Secretariat last week turned into a race row with claims by some black nations – including Nigeria and Namibia – that the peer was being targeted because of her colour.

Critics of Lady Scotland, pointed out that of her five predecessors in the prestigious post, three came from Guyana, Nigeria and India.

Well-placed sources say her conduct at the secretariat has been criticised privately by diplomats from South Africa and Ghana.

The Secretary General was branded ‘Baroness Shameless’ and ‘Baroness Brazen’ after it was disclosed in 2016 that she spent £338,000 refurbishing her grace-and-favour apartment in Mayfair, central London.

It later emerged that £590,000 of the UK’s foreign aid budget had been spent on Marlborough House, the secretariat’s headquarters, in two years.

The baroness was also criticised for appointing political allies to key posts. And a senior official forced to quit his secretariat job while working under Lady Scotland won nearly £300,000 in compensation.

International leaders have agreed to give her a stay of execution until the Commonwealth Heads of Government Meeting in Rwanda in June where a final decision on her future will be made.

However, some senior figures believe her position has become untenable and that she should step down earlier.

Mr Johnson is said to be backing moves to persuade Amina Mohamed, a 58-year-old Kenyan politician, to challenge Baroness Scotland for the £160,000-a-year job. Born in Somalia, she learned English by reading Sherlock Holmes novels as a child.

She studied at Oxford and is a qualified lawyer.