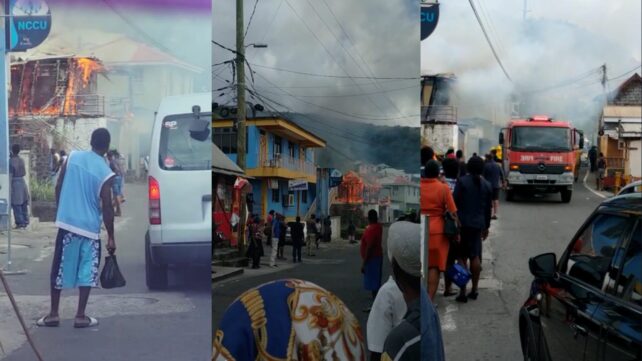 Investigations are ongoing into the cause of a house fire that occurred in the village of Mahaut on Tuesday.

According to Deputy Fire Chief Wayne Letang, the building in question was located near the Mahaut Credit Union along the E.O. Leblanc Highway.

“I can confirm that staff at the Roseau Fire Station responded to a house fire in the village of Mahaut this afternoon at approximately 2:30 PM,” he said.

He noted that the building was constructed of two floors, a ground floor, and a first floor.

Furthermore, he stated that the building was owned by Mr. Charles Esprit who is presently out of state.

“The building in question was in a state of abandonment post-Hurricane-Maria, but was frequented by homeless persons on occasions,” he revealed.

Letang explained that the entire top floor of the building was destroyed by the blaze before it was controlled and extinguished by staff of the Fire and Ambulance Services.