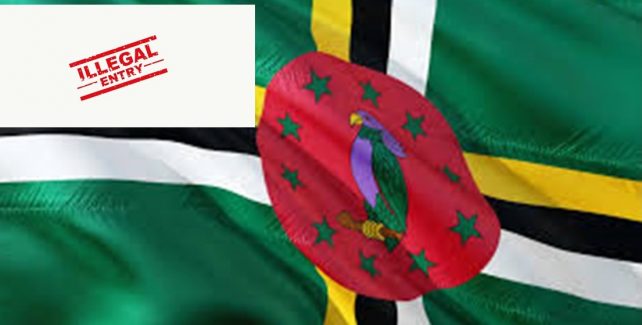 Minister for National Security Rayburn Blackmoore has warned offenders about the penalties they could face if caught entering the country illegally.

In his latest condemnation of illegal entry into the country, Blackmoore exhorted the police to go to the various communities “with no exception” where such activity is suspected and conduct investigations.

“This illegal entry into this country which is referred to as backdoor activity, in my view is the single most dangerous national security threat to the country,” the minister said.

He said the police by themselves cannot fight this serious security threat and called for a “collective consciousness” among Dominicans to tackle the issue.

“It is also going to require persons to provide information, persons also to act like their own police in their various communities because this thing is a threat to all of us,” Blackmoore asserted.

He said the entire arm of the criminal justice system must be involved to support the police and take into consideration the sentiment of the populace, “because there is consensus among us that backdoor activity is a serious threat and likewise if somebody is convicted, the fine in itself, must reflect the sentiments of the populace.”

“It has to be a collective endeavor with all relevant parties playing their part,” he noted.

The minister stated that according to the law, anyone who enters a port otherwise than through an approved port of entry, commits an offense.

“And on some convictions, is liable to a fine of $5000 or one year [imprisonment] or both,” Blackmoore explained.

He pointed out that anyone who aids and abets or facilitates someone to commit the crime, commits an offense and will be charged a higher fine.

“Its $25,000 or that person can also be sentenced to jail,” Blackmoore warned.

He pointed out, however, that the law makes a distinction between somebody who enters the country, “let’s say someone enters on a boat, the person is a passenger, but for human trafficking, if that person assists any other person to enter or leave the country in an unlawful manner, upon conviction, the fine is $100,000 or 7 years imprisonment or both.”