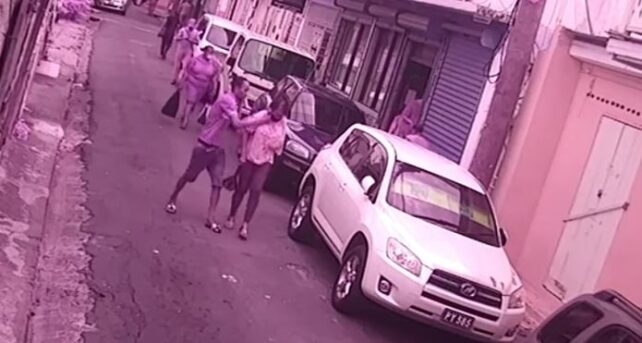 A 26 year-old Canefield man has been slapped with a fine of $4,500.00 for the offense of theft of a gold chain in the city of Roseau two months ago.

Taj Burnes appeared before the Roseau Magistrate court today, August 2, 2022, where the charge was read to him which he pleaded guilty to.

The charge states that on May 27, 2022, at Cross Lane, Roseau, Burnes stole a gold chain and a gold pendant from Fredericka Alexander-Durand valued at EC$4,000.00.

According to facts of the case presented to the court by Police Prosecutor, Inspector Davidson Cadette,  on the aforementioned date about 9:30 a.m., Alexander-Durand was walking in Roseau near the vicinity of J.R bar when Burnes approached her from the back and grabbed her chain and pendant from around her neck.

She swung her plastic bag after him but he ran in a northerly direction. She made chase after him along with other civilians who were present on the scene but Burnes made good his escape.

The complainant subsequently made a report to the Police Headquarters and Constable Lawrenece was assigned as the investigator in the matter.

During the course of his investigation, the officer received certain information and went to the home of the Burnes at Housing Scheme, Canefield in search of him. However, the search proved futile.

A few days later, Burnes’ mother contacted the police and handed the stolen gold chain to Constable Lawrence and informed him of the whereabouts of her son.

On July 31, 2022, the investigating officer met Burnes in police cells and he was later interviewed and had a confrontation with the Virtual Complainant (VC). There the defendant admitted to stealing the chain but stated he had no recollection of a pendant being attached. A charge of theft was subsequently preferred against him.

At the court hearing, when questioned by Chief Magistrate Candia Carrette-George as to why a custodial sentence should not be imposed, the defendant stated, “I was frustrated and something go up in my head.”

In handing down her sentence, Magistrate Carrette-George said she took into consideration Burnes guilty plea, the fact that he is not known to the court and the fact that he appeared remorseful for his actions.

“I will not send you to jail because you are a first time offender but I hope you take this as a learning experience,” Magistrate Carrette-George told Burnes. She further cautioned, “Try your best to stay on the right side of the law. You need money go and work for it.”

The defendant was ordered to pay compensation to the VC in the sum of $2,500.00 for her pendant which was not recovered no later than October 31, 2022.

He was also fined an additional $2,000.00 to be paid to the court on or before February 28, 2023. In default of any payment the defendant will be imprisoned for six months.

In other court news, Julien Maxwell of River Street, Roseau, is on remand at the Dominica State Prison in search of a surety in order to be released on bail.

Maxwell appeared before the court today where a charge of burglary was read to him. He was not required to enter a plea as the matter is an indictable offense and is expected to be tried before a judge and jury.

It is alleged that on July 22, 2022, at Solomon Lane, Goodwill, Maxwell entered a dwelling home as a trespasser and stole certain items to include, a gold and silver jewelers, a baby bag and baby clothing, canned goods, pasta and deodorants all to the total value of EC$2,862.00

Police Prosecutor, Inspector Cadette did not object to bail however the defendant was unable to present a surety to the court.  As such Magistrate Carrette-George remanded him in custody.

The matter was adjourned to December 2, 2022 for Preliminary Inquiry.