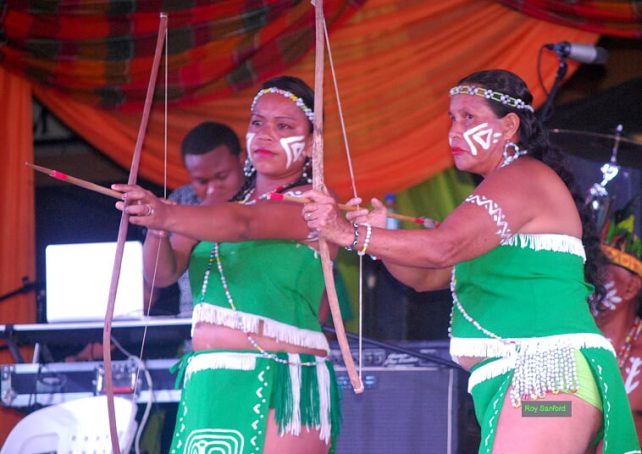 A series of colorful performances kick off Dominica’s 41st anniversary of Independence at the Bayfront in Roseau over the weekend.

The event featured a cultural showcase dubbed Evolusyon, which was performed by a Dominican contingent at CARIFESTA XIV in August in Trinidad.

It featured aspects of Dominica’s culture ranging from the Kalinago heritage to traditional dances such as bele, jing ping, flirtation, to la peau kabwit, carnival costumes, and drumming. There were performances by Signal Band and Dominica’s lady of Song, Ophelia Marie.

During the event, Minister for Culture, Robert Tonge called for the building of stronger ties between the island’s culture and its tourism product by promoting its “rich heritage.”

He appealed to all Dominicans to maintain a Creole identity.

“As we build resilience, I am calling on everyone to maintain Creole attitude to living and always maintain our Creole Dominican identity, our Caribbean identity even as we absorb certain elements of our globalized culture,” he stated.

Addressing the event, Minister for Climate Resilience and MP for Roseau Central, Joseph Isaac, called for unity among all Dominicans during the Independence season.

He said everyone must join hands and put aside all differences as the island celebrate the things that all Dominicans share in common.

“I am pleased that the majority of Dominican’s share this view and that those who seek to fan flames of discord are very much outside of the mainstream,” Isaac stated. “So let us join hands, let us look at the bigger picture. Let all of us work together to rebuild our country in a better and more resilient manner. So today, we pause for celebration.”

This year Dominica is observing its anniversary of Independence under the theme “Celebrating Resilience and Rejuvenation two years on” in recognition of the island’s recovery from the ravages of Hurricane Maria in 2017.

See photos below from the event. Some photos by Roy Sanford.