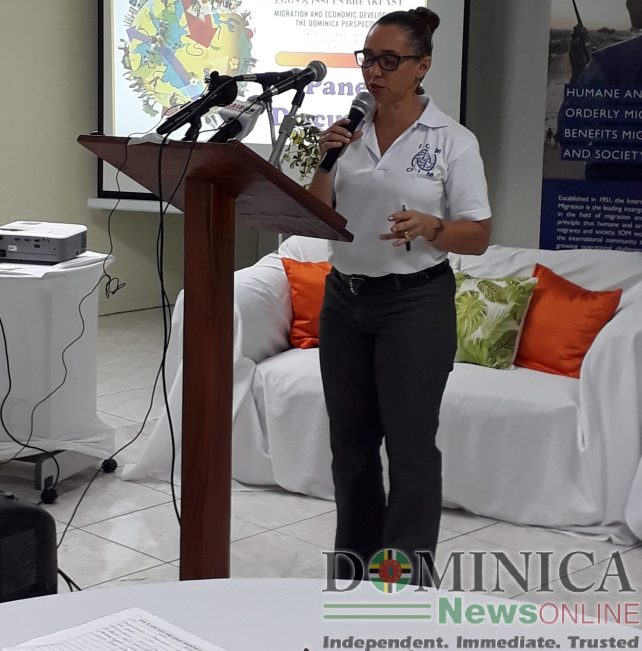 Dominica was rated as number two in terms of the twenty top countries of immigration by proportion, according to the 2019 World Migration Report.

This information was revealed by Communications Officer for the International Organization of Migration (IOM), Maxine Alleyne- Esprit.

She said the Caribbean has one of the highest immigration rates, which is the movement of people outward worldwide of skilled and tertiary level educated individual.

“The World Migration Report of 2019 rated St Kitts and Nevis as number one and Dominica as number two in terms of the top 20 countries of immigration by proportion,” she explained.

According to Alleyne-Esprit, between 2017 and 2018, it was estimated that 9.5 percent of the Dominican population were migrants, whereas in Antigua the figure in terms of the number of migrants as a percentage of the overall population is 28.7 percent.”

“We are estimated slightly under 10 percent, whereas Antigua is close to 30,” she said.

Additionally, Alleyne- Esprit said globally statistics show that one in every 30 persons is a migrant.

“At least 3.4 percent of the global population contributes over 9 percent to global GDP. The evidence is also that migrants spend on average 85 percent of their earnings in their host countries, so whereas we have remittances and remittances generally accounts for just about 15 percent of the income of migrants,” she said.

Meantime Alleyne-Esprit said Dominica plays the role of both country of origin as well as host country, saying it possess challenges either way.

Alleyne-Esprit was speaking during the recently held ‘Eggs & Issues Breakfast”.