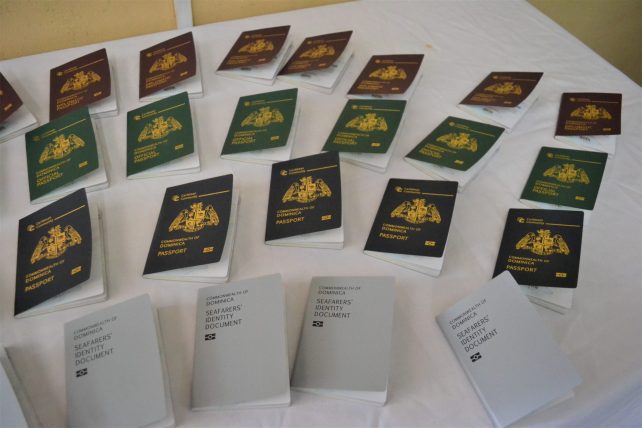 Recently the Ministry of National Security announced the transition period from readable passports to E-Passports had been advanced to end of August 30th, 2022 from the original deadline of July 2023.

The machine readable passport from 2007 to present is said to have served Dominica well, however as the government strives to build a dynamic country to be part of the global state of excellence, it has to comply with international standards and best practices so far as travel documents are concerned, more particularly passports.

“The pace in how the world is moving right now and the requirement for member states to have more secure passports, that time has gone on us and we would not want the situation whereby any Dominican traveling with a passport that is considered to be antiquated can be denied entry to the United States or Canada or any other country in the world,” Minister for National Security and Home Affairs, Rayburn Blackmoore said while speaking as a guest on Prime Minister, Roosevelt Skerrit Annou Pale talk show on Sunday night.

Blackmoore continued, “It is something that we have to do, it is therefore a very ambitious project, but I am confident that if we continue to do what we are doing with utmost precision we can actually get it done.”

“It also contains a biometric identifier and that biometric identifier holds certain biometric information about the holder of that passport,” Blackmoore explained. “In our case we are using facial recognition and therefore the issuing system that we have has a scanner. That scanner is able to scan the peculiar, facial characteristics of an individual.”

He said further that an E- Passport is much more secure than the machine readable passport and it’s difficult to duplicate.

Blackmoore indicated that the government has improved space at the Immigration Department in Roseau to assist in issuance of the new passports.

“We have improved space in the immigration department, a new building was constructed upstairs for additional space,” he stated. “We have also brought onboard additional staff members to that section, namely 5 new, very bright civilians who have been recruited.”

He continued, “We have also recruited 4 additional persons, recently retired senior police officers, because we are going to require additional supervision.”

Blackmoore went on to state that there are also mobile kits available with the same capacity to that of the system in the Immigration Department in Roseau, which is equipped with a camera and the applicant’s picture can be captured instantaneously, “and all your bio data information can be captured.”

He revealed that 91 applications using the mobile kits have already been done in Vieille Case and 148 in Portsmouth.

He said that service was launched in the beginning of February this year and the government intends to bring the service to the doorsteps of Dominicans in various localities across the country.

This week the team will move to Mahaut and Grandbay, followed by Marigot and Wesley on March 7th then to Grandbay and Castle Bruce.

He stated further that the government also intends to bring a similar service to Dominicans living overseas, outside of United Arab Emirates (UAE), New York or London.

“In addition to the service that is being given right now at our mission offices, we have been always consistently thinking ahead, we have ordered already what we call passport work stations which will be permanent offices in the mission offices in the 3 locations mentioned, which means therefore, Dominicans living overseas who wants to apply for a passport will be able to physically come to an office in a similar fashion as if to say that person has come to the immigration department in Roseau,” he said.

He said also that the applicant will be able to have their picture taken if they don’t have one and apply physically and instantaneously your information will be transmitted to the central office in Roseau for final vetting and issuance.

“Every passport will be issued by a central issuing system which is in Roseau, Dominica and that is done for the precise reason of ensuring that the security of that passport and integrity of those elements can  be maintained at the highest level,” Blackmoore noted.

He said the Ministry of National Security has been working in concert with the Ministry of Foreign Affairs to ensure that all the logistics are put in place to facilitate that process, “when we will be moving to Canada, Texas (Houston).”

“Where we do not have mission offices we will be providing opportunities to Dominicans and we will bring the mobile kits to their doorsteps also,” he revealed.

As far as the Caribbean is concerned he said the government is hoping to finish with their local outreach program by way of mobile kits on the 18th of March 2022, “and subsequent to that we will be moving to the Caribbean region.”

Meanwhile, Inspector in Charge of Immigration, Deryck St Rose has said that using the mobile kits has helped ease the congestion at the  main office in Roseau and also helped individuals save money.

“They will not have to pay a bus fare from whatever community to town and also with the cameras they get the photographs for free,” he said.

He said the application process remains the same as for the machine-readable passport.

Applicants are required to submit along with the applications, two passport size photos, original birth certificate, marriage certificate, certificate of naturalization where applicable and the current or the expired passport.  A recommender is required to recommend the form stating that they know you for a period of years and in the case of an infant the recommender must know the parent for a number of years. The recommender also has to certify at the back of one of the photographs.

St Rose said all payments are done at the treasury.

“We are on the road with the mobile kits, we have an officer there, the people in the rural areas could pay and get a receipt and that receipt will be attached to their application for processing,” he explained.

Persons can also apply online, download the forms from the government’s website www.dominica.gov.dm or pick up a physical copy at the immigration department in Roseau.

An E-Passport takes within 2 to 3 weeks to be issued after applicants apply.

The department can print up to 300 passports a day.