Two buildings in Roseau were extensively damaged by a fire on Saturday April 3rd, Easter Saturday.

The fire occurred sometime after 3:00 p.m. in the area between Old Street and Hanover Street where the building which houses Q95FM Radio is also located.

According to the owner of one of the fire-damaged properties, Jacqueline Prevost, the attic of her two-storey building was gutted, the roof gone, and the first floor which was empty and had been unoccupied for the past year, received some damage. However, she said the ground floor which housed a restaurant, received only water from the hoses of the firemen.

“It’s going to be okay,” Prevost told DNO’s reporter during an interview at the scene of the fire as she disclosed that the property was insured.

“Job lost more than that,” she pointed out, drawing comfort from one of the greatest test-of-faith stories in the Bible.

The adjacent building which is owned Garraway Enterprises, appears to have sustained significant damage to the company’s spare parts storeroom downstairs and the residence upstairs of family member, Roderick Rolle.

Larry Bardouille, another family member told Nature Isle News in an interview that they were alerted to the fire in the more than 100-yer-old building by a passerby at about 3:30 pm. He added that there were three children upstairs who came out and were taken away.

“From what we have seen thus far, I can report major damages to the contents of the storeroom,” Bardouille said. However, he had complimentary words for the firemen who he said and gave thanks to God for for the absence of death and injury.

“Whenever you have a fire it is always a major loss to everyone,” he pointed out…”but like everything, we will pick up the pieces and bounce back.”

According to historical information, the Garraway Enterprises building was the early French prison from the early  1740’s, the first one in Dominica before the British came and built a bigger one where police headquarters is now, in 1781.

For a while, there were fears that the flames would engulf the building which houses Q95FM Radio. However a Q95 staffer later told DNO that the station got off practically unscathed except for a temporary loss of power. 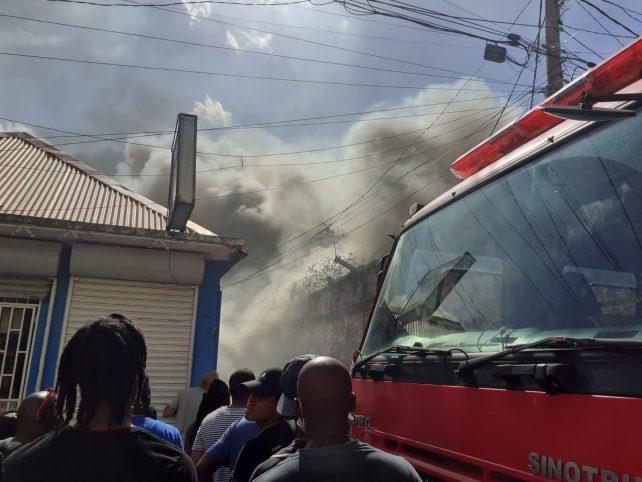