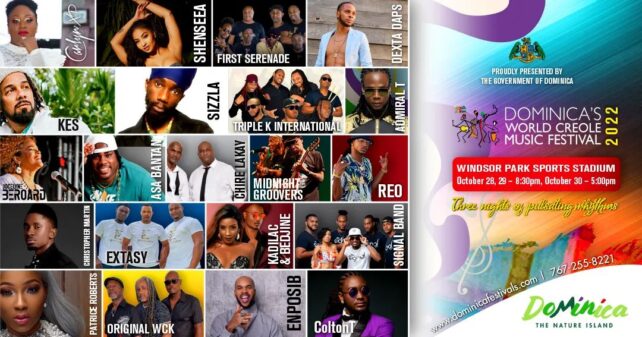 Following a two-year hiatus, the 22nd edition of this year’s festival was officially launched last evening -August 10- where 21 of the confirmed performers were revealed to the public.

Among the other international acts in this year’s lineup, are Trinidadians Patrice Roberts who performed at the last festival in 2019 and Kes The Band who made an appearance in 2018.

Making an appearance for the French, Zouk and Compas lovers will be the former lead singer of Kassav band Jocelyne Béroard. Representing the Haitian Kompa music will be K-Dilack and Bedjine,  well-known Haitian artist/band Enposib, Chire Lakay as well as  French singer of reggae-dancehall music Admiral T.

Also expected to rock the festival are bouyon legends, WCK and the almost 40-year-old versatile First Serenade band. Also on the lineup will be Dominica’s cadence icons Midnight Groovers.

Fans will also be treated with ‘the youngest and the baddest’ Signal Band, Dominica’s number one dancehall artist Colton T and Dominica’s very own Kompa band the Extacy band.

Making their first appearance as solo artists on the big stage will be ‘the fresh prince of boyoun’ Reo ok Boom and ‘Bouyon queen’ Carlyn XP.

As announced, season tickets will be sold at a cost of 375 dollars, however, patrons do have the opportunity to take advantage of the early bird special of 300 on the Dominica Festival Comittee (DFC) website.

Nightly tickets are also being sold at EC$150.