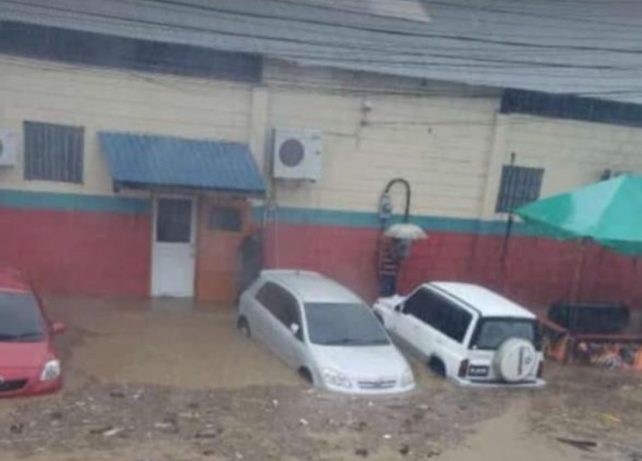 A trough system which dumped heavy rainfall on St. Vincent and the Grenadines Thursday morning, has further compounded the island’s troubles amidst its La Soufriere volcano eruptions.

Flooding, landslides, lahars, collapsing buildings, have all been reported as inclement weather covered the island on April 29.

The University of the West Indies Seismic Research Center had announced yesterday, Wednesday April 28, that rainfall had already begun creating lahar flows – which are rapidly flowing dense mixture of rock debris, ash and water. These features have the consistency of wet concrete as they flow and can happen during and after eruptions. People were warned to stay away from the red and orange zones and police had restricted travel to these areas.

But today, Thursday, things seemed to take an even worse turn with news reports and social media videos and pictures showing landslides carrying away dwelling homes while people looked on in shock, some running and screaming, trying to get to safety.

Traffic was also at a standstill in certain areas at some point of the morning.

Earlier, there were reports of rumbling sounds –an indication of lahars – according to the seismic research center.

“Persons should stay away from streams, rivers and areas prone to flooding. Do not go into these areas unless authorities advise it is safe to do so,” the center said in an update on its Facebook page on Thursday.

The mudflows or lahars occurred in the north of the island.