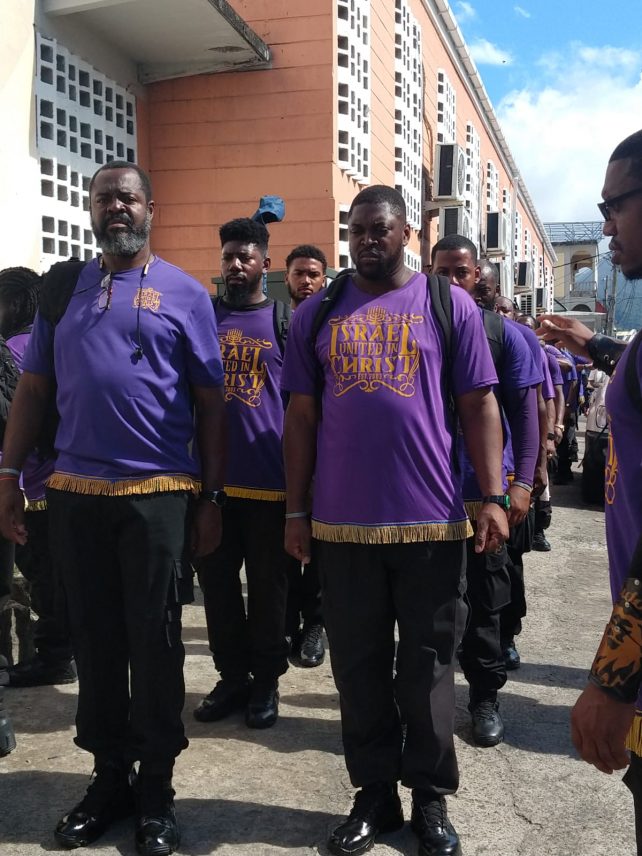 A group of Black men marched through the street of Roseau in military style last week, spreading their message that Black and Hispanic people in the Americas are of the twelve tribes of Israel.

Dressed in purple t-shirts with the words “Israel United for Christ”, with black pants and combat boots, preaching, teaching “Israel Unite for Christ!”.

Israel United for Christ – Captain Zakar told Dominica News Online that they are traveling across the Caribbean to let their brothers know the truth in the bible about them.

He said the truth is that Blacks and Hispanics are descendants of Abraham, Isaac,  and Jacob.

“They are the Israelites the Bible speaks of and we [came] here to give that knowledge to them so that their minds can be lifted. For ye shall know the truth and the truth shall set you free!”,” he said.

Zakar also stated that their goal and plan of action is to first teach their brothers about their true history and who they are in the Bible.

“Once they learn the foundation of what God calls them specifically in the Bible, they can begin to study and read for themselves with new eyes, to be that new creature in Christ”.

According to Israel United for Christ – once the descendants of the Twelve Tribes of Israel which are spread abroad in the Americas and Europe begin to comprehend who they are and the truth about themselves according to the scriptures, they will fellowship with each other more profoundly and begin to worship God in spirit and in truth and not according to how they were taught by the Europeans.

With over 2000 flyers handed out on the streets, Captian Zakar said that Dominicans were very open and receptive to their message.

“People coming up asking questions, the reception here has been great!”.

According to reports, the men came on a cruise ship, and men went to town spreading their message while their wives toured the island.

Zakar said that “Israel United for Christ was sent by God to Dominica [to] give that word to brothers and sisters.”

“For this day and time, God has sent us to Dominica to give the word, tomorrow it will be another brother and sister’s time to hear this truth”, he said.

He said that they will spread the message that Black and Hispanic people are descendants of the twelve tribes of Israel until that truth is spread throughout the four corners of the earth “to the end which is until Jesus Christ comes again”.

According to their website – Israel United in Christ, inc. was founded in 2003.