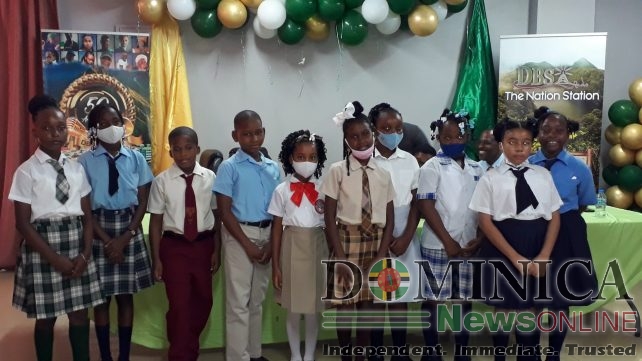 Manager of DBS Radio Cecil Joseph is suggesting a name change for the DBS Radio Ministry of Education National Reading competition next year.

Joseph, who was addressing a prize giving ceremony for the competition held at Windsor Park Sports Stadium last week, said he believes the event may have to be called a symposium or an exhibition rather than a competition.

“I have realized in the competition for many years that at the end of the competition, our children cry when they don’t make the finals or they are not in the top 3 or four and that is emotional..,” he said. “And next year, I would like to send this message very early to the organizers, DBS and the Ministry of Education that we may have to now call the programme either a symposium or an exhibition.”

He continued, “Because when we hear the children in the finals, we know that they are exhibiting the ability to read and it is good we can start our children at a very early age to compete.”

Joseph thanked the schools who have allowed their students to participate in the competition.

“As we move forward we are hoping that the other schools or other students who did not make it this year start practicing, start getting themselves ready, because next year at the same time it will be a continuation of the reading symposium or reading exhibition,” he said.

Senior Education Officer, Robert Guiste called on parents to read with their children.

Permanent Secretary in the Ministry of Education, Chandler Hyacinth also encouraged parents to continue to work with their children, elaborating on Guiste’s message.

She also called on the schools to continue the Creole cause.

“Simple phrases, simple words, get them to pronounce it; get them to spell it; get them to be able to use it,” Hyacinth urged parents. “It doesn’t have to be much, small bites and they will get it and come next year, we will be able to see them exhibiting what they would have learnt over the year in Creole.”

She added, “Spend time with them and provide them with the kind of environment that will help them to succeed.”

Cheques and laptops were presented to the top four students and schools in the competition.

Cheques were also presented to the finalists of the competition.

DBS Radio, in collaboration with the Ministry of Education, held its first National Reading Competition on July 2nd, 2008, in order to inspire children to read for today and tomorrow.

The reading competition was the brainchild of the late iconic broadcaster and creole legend Felix Henderson.

The Headline Sponsor of the competition was the Office of the Prime Minister.

DBS Radio will be celebrating 50 years of existence on the 1st November 2021.