After a one-year hiatus due to logistics reasons, the Rotaract Club of Roseau recently relaunched its annual Children’s Christmas Party in the village of San Sauveur.

The Rotaract Club of Roseau is a voluntary community service organization for young professionals between the ages of 18 and 30. The club has, for the last few decades, selected a different community each year to bestow Christmas cheer on the children in that community.

This year on December 14th, the club brought fun, frolic and festivities to the students of the San Sauveur Primary School. The club catered to 75 children at the school and treated them to several exciting games, music and delicious snacks. The halls and grounds of the school were electrified with sounds of laughter and cheer as the children participated in races, dancing and musical chairs to name a few. At the end of the party, each child received a Christmas gift from the club’s Santa, President Keanu Winston.

Coordinator of the project, Rotaractor Iyanka James, indicated that organizing the event had a few challenges, especially for the number of students that had to be catered for but seeing the smiles and cheer on the children’s faces was the greatest reward.

Reigning Miss Dominica Marisol John, who is also a member of the Rotaract Club, said it was an enjoyable experience and she had a lot of fun with the children. They brought back many fond memories of ring games and other schoolyard games. She was elated at how their faces lit up when the gifts were presented to them.

In 2017 in the aftermath of Hurricane Maria, the club joined with several international and local partners to expand the annual Children’s Christmas Party to the Rota-Mas Train whereby they delivered toys to over 800 children in 11 different villages.

The Rotaract Club of Roseau is sponsored by the Rotary Club of Dominica. 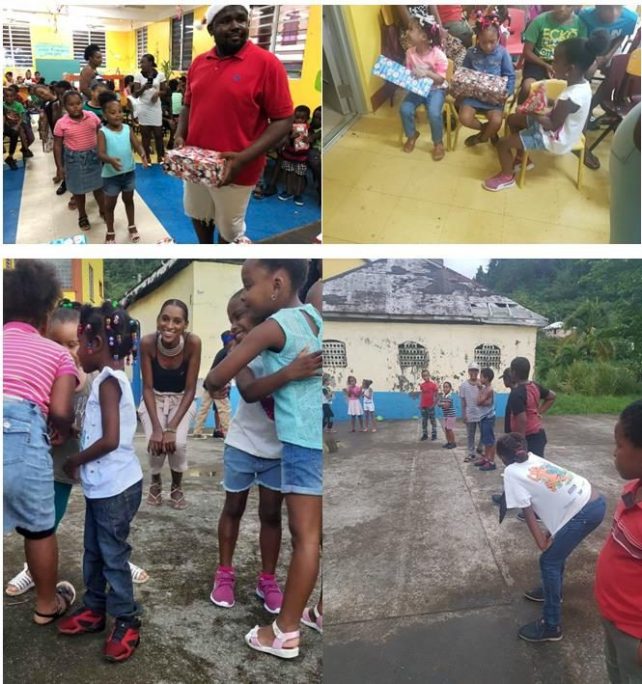