President of the United Workers Party (UWP), Isaac Baptiste, has called Prime Minister Roosevelt Skerrit “dishonest and hypocritical” in response to the prime minister’s call for the UWP to fully engage in his plans to pursue electoral reform

The prime minister has revealed that he has invited Caribbean Jurist, Sir Dennis Byron, to perform the service of sole commissioner for electoral reform in Dominica. He said Sir Byron, who is the former president of the CCJ, has accepted.

At the swearing-in ceremony of the new cabinet on Tuesday, Skerrit pleaded for the opposition’s cooperation in the national interest in this process and extended a “hand of brotherhood” to the UWP by inviting them to work in peace and unity with the government in the wake of the general elections.

In response, Baptiste revealed that almost two years ago, a letter was written to the prime minister raising three major issues one of which called for dialogue between the governing party and parliamentary opposition on ways to move forward on the issue of electoral reform.

He said the prime minister didn’t even have the courtesy of acknowledging receipt of that letter.

“They did nothing; the prime minister did nothing. We met with the President, His Lordship the Bishop, they were not able to convince the Dominica Labour Party (DLP) and the prime minister, in particular, to speak to the issue and respond satisfactorily to two basic issues,” he explained. “Now that they have stolen the election, now that he finds himself in office and he’s looking at another five years in front of him, he’s trying to say that his offering an olive branch.”

Baptiste said it is not within the remit of the prime minister to speak now on the issue of electoral reform. It is that of the Electoral Commission.

Baptiste also said that he finds it “rather strange” that one of the most eminent Jurists in the Caribbean, Sir Dennis Byron is accepting to be head of a one-man commission without knowing the terms of reference of the commission.

Skerrit said at the swearing-in ceremony that the terms and reference and commission will be announced early in the New Year at which time a secretariat will also be established to support Sir Dennis’s work.

“If you are going to appoint someone and someone is going to accept, that person, especially in the capacity and given the level of intellect involved, it would be difficult to understand and believe that Jurist Bryon accepted to chair and lead that commission without knowing the terms of reference of the commission,” Baptiste noted.

He said this situation now leaves the UWP concerned as they question whether or not the prime minister is being honest with the people of Dominica.

He said Dominicans must redefine the electoral reform process because, given what was observed in the last election, going through the simple process of re-verification of names, the DLP will continue finding ways “in getting  ID cards overseas to people”, without a complete re-registration of all voters.

The UWP president also anticipates that there will be a next general election within the next two years.

A copy of the UWP letter to PM Skerrit is posted below. 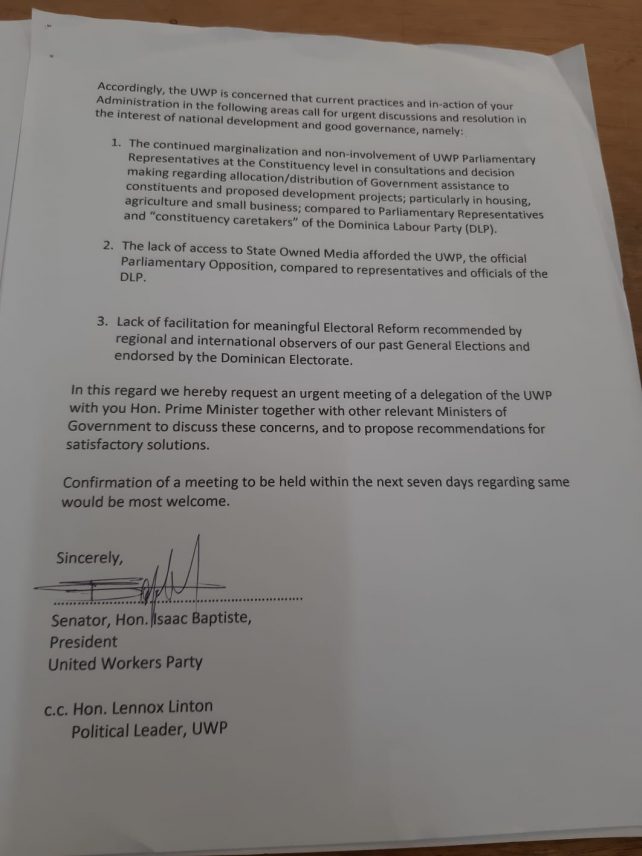