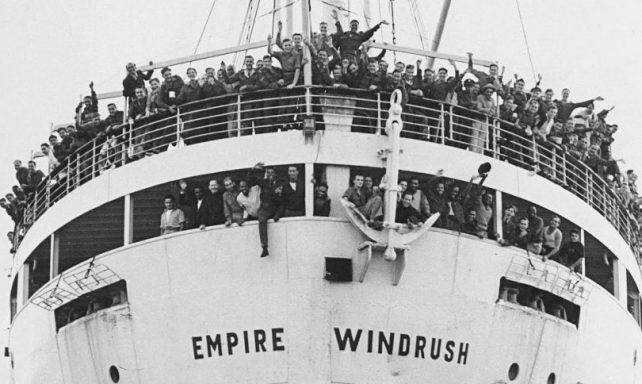 On  June 21, 1948, the former German troopship j”Monte Rosa”, captured by Britain and renamed “HMT Empire Windrush” docked at the Port of Tilbury, near London. Of the ship’s 1,027 passengers, it is estimated that approximately 800 were from the British West Indies; primarily from Jamaica.

Many of those who disembarked that day were World War II veterans of the Royal Air Force who were unable to find suitable employment at home. It must be noted that as British subjects, the law allowed for those British West Indians to work and settle in England. Indeed, British West Indians had been taught at school that Britain was the Mother Country and they had every reason to believe it.

The Windrush journey by British West Indians was birthed by the distinguished record of British West Indians in the Royal Air Force. The emigrants filled the needs of the British economy for a loyal, skilled, and English-speaking labor force. Their journey spurred West Indian nationalism, added to the prosperity of the mother country, and advanced the independence of the  British West Indian colonies.  In addition, the remittances of those who made that trip to the United Kingdom – alongside those who followed in their wake – elevated the standard of living of the families they left behind.

It was quite common in the Dominica of my childhood for families to receive parcels at Christmas from relatives in England. Those who went away also left sadness upon their departure. More than fifty years later, I can still recall one such jarring instance.

One early Sunday morning in 1969, when I was around eight years of age, I got word that a neighborhood friend by the name of “Kelvin” was going away to meet his mother in England. A group of us boys rushed to Kelvin’s modest home on Boyd’s Avenue in Dominica’s capital of Roseau. There,  his grandmother was busy brushing his hair with Vaseline and fixing his bow tie. Kelvin stood there, unsteady on his feet as his grandma jostled him about and fussed over him. Next to him was a small brown grip (suitcase) with his name scrawled in black crayon on a bent cardboard tag, attached by string to the grip’s handle.  Kelvin had a new long sleeve white shirt, black bow tie, black shorts, long black socks, and squeaky new black shoes. Kelvin did not look happy, however. Indeed, he sobbed quietly as we stared at him, wide-eyed.

Now Kelvin was going away to the land where glossy toys came from, castles dotted the land, and the ground was white with snow. I never saw Kelvin again. Such separation of families was common and added a somber note to the promise of migration.

However, that great migration to the United Kingdom colored the lives of that postwar generation of West Indians. Almost everyone had a family member or close friend who had gone away to England. For clarity, British West Indians considered the entire United Kingdom as ” England.” Our family was no different.

In 1957 my maternal uncle Ambrose John Baptiste traveled to Britain as part of the Windrush generation. His brother Washington followed in 1959, and the last brother Johnson arrived in Britain in 1961; the year I was born. I did not grow up with my uncles but heard of them, saw their photos, was the beneficiary of gifts and met them in my late teens.

Ambrose and Johnson became miners in Nottingham and members of the National Union of Mineworkers led by Arthur Scargill. Washington became a builder. Our brother Lawson Christian, trading in the network of family ties, traveled to Nottingham in 1975 and studied civil engineering at Trent Polytechnic in Nottingham.

Our father Wendell McKenzie Christian, who served in the British Army during World War II and admired his wartime leader Winston Spencer Churchill did not travel to England as part of Windrush. He stayed home and served as a police officer, and firefighter – serving the state.  Called the “Major” by his British resident brothers in law, he travels to the United Kingdom for the first time to visit his own siblings and witness the wedding of Prince Charles and Princess Diana. Our father’s sister Ruby and family lived in Glasgow, Scotland. His brother Clement worked for the London City Council; his sister Drina worked as a nurse in Leicester and his other brother Joshua worked for the local council in Leicester.

In 1981 Johnson John Baptiste became the first Black union representative in the National Union of Mineworkers. Our paternal Aunt Ruby Christian Burke, married World War II Royal Air Force veteran Alfred Dolar Burke, taught music, raised a family, and turned 100 in Glasgow, Scotland in July 2019.  The son of a British soldier, and nephew of uncles and aunts who made their lives in the United Kingdom, I nonetheless became a student leader advocating the decolonization of the British West Indies and the independence of Dominica.  Through it all, I experienced firsthand the benefits brought by the Windrush generation to those left behind and the rise of British West Indian nationalism spurred in part by those who served in the war.

In 2009 I co-authored “For King & Country – The Service and Sacrifice of the British West Indian Military” with Canadian Judge Irving W. Andre who is of Dominican heritage. That book captures the story of the long service of West Indians in the British military that consolidate that nation’s colonial conquests and the anti-colonial legacy of World War II Royal Air Force flyers like  Squadron Leader Phillip Louis Ulric Cross (Trinidad), Flight Lieutenant Cy Grant (Guyana), Flight Lieutenant Dudley Thompson (Jamaica),  Pilot Officer Errol Walton Barrow (Barbados). The distinguished service in the war of those British West Indians eased the entry of their kith and kin into British society, while at the same time eroding the hold of the colonial apparatus on British West Indian societies and Africa.

In the air, on land, the Windrush generation went up and away!  Their journey sought greater freedom, education, and economic opportunity. The Windrush generation was birthed by the war and helped to rebuild the United Kingdom. With zest, creativity, and robust renditions of island culture West Indians remade UK society in ways colorful and enterprising. In 1948 Edward Scobie of Dominica launched “Checkers” which was styled “Britain premier Negro Magazine.” Scobie, a graduate of the Dominica Grammar School had served in the Royal Air Force, rising to the rank of Flight Lieutenant during World War II.  He started “Tropic”  as, in his words “the voice of the 250,000 colored people in Britain.” The magazine published short stories by West Indian literary giants such as  Jan Carew, George Lamming, Samuel Selvon, Winston Whyte, and Donald Hinds.  In 1961, Scobie started “Flamingo” magazine which at one point sold 20,000 copies in the United Kingdom and 15,000 overseas. Scobie went on to international acclaim  with his publication in 1969 of “Black Brittania-The History of Blacks in Britain.” That work was the first book-length history of the African presence in Britain which dated from the period of the Roman Empire’s occupation of Britain.   Indeed, led by journalist and activist Claudia Jones of Trinidad, West Indians were spreading their wings across the land in other ways beneficial. Jones pioneered the annual Notting Hill Carnival with the first event held in 1959 – it is now considered the largest such event in Europe.  In 1972. Dominica born  David Michael became the first Black police officer in Lewisham. After thirty years of outstanding service to the Metropolitan Police Department, he retired as a Detective Chief Inspector at Scotland Yard. There are many other such stories of West Indian success in the United Kingdom.

However, in their struggle for survival, the migrants to the Mother Country tasted the bitter fruit of racial prejudice. Indeed, the cruelest cut was the deportation of some children of the Windrush generation as “undocumented foreigners” early in the 21st century. That, even where their parents and/or relatives had rushed to aid Britain at its darkest hour during World War II or helped rebuild British cities battered by the German blitz. British officials have since apologized and promised that compensation will be paid for those who were wronged. I am confident that such injustice will, in time, be eradicated by honest struggle, commitment to rule of law,  and progressive solidarity. It is by such efforts we shall secure justice and beneficial reform.

The Windrush generation built networks that helped sustain the modern Caribbean. An industrious generation, they provided remittances, leadership, and technical know-how transfer that aided the rise and survival of the islands from which they came. Our best tribute to the sacrifices made by that generation is to pursue excellence in all things. Let us never wallow in regret over the imperfections of the moment. Rather, may we always be inspired by their sense of industry and commitment to good order, discipline, and education. It is upon the winds of such optimism and value engineering that they ventured forth in 1948 to secure a sense of personal and community victory. We shall honor them best where we do likewise.