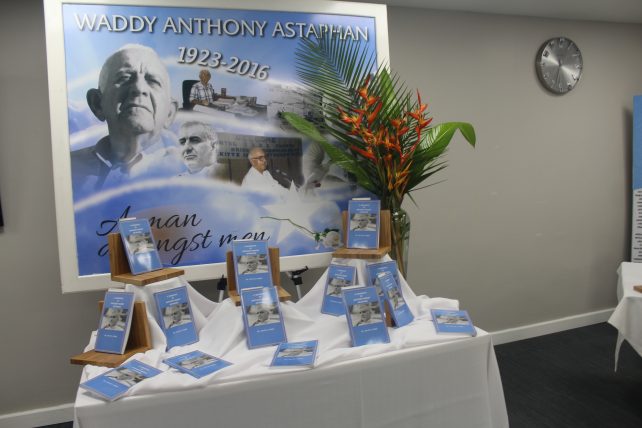 Historian Irving Andre who has chronicled the life of legendary businessman/ sportsman and philanthropist, Waddy Anthony Astaphan, in a 113-page book entitled “a biography of Anthony Waddy Astaphan” has described him as a man who has made a meaningful contribution to the development of Dominica’s development.

Born on October 10, 1923, in Suriname, Astaphan arrived in Dominica in 1933 with his family and his father (Anthony) opened up a modest business in Roseau selling staples such as sugar, flour, rice and butter to locals.

Waddy attended the St. Mary’s Academy (SMA) where he excelled both in academics and sports. He represented the school in both cricket and football and did very well in the senior Cambridge Examination gaining a distinction in Geography in 1940.

He also fulfilled his father’s wish by forgoing a career in medicine to join the family business in 1941. During the decade, Andre writes in his book, Astapahn boldly expanded the scope of the business by manufacturing furniture with Dominica’s timber and exporting vanilla, cocoa and bay oil.

Irving Andre, who spoke via Skype from Canada, at the launch of the book at Fort Youg Hotel on Monday, describes Astaphan as “a stickler for punctuality and production and for a fair day’s work for a fair day’s pay. He said it is as a result of those qualities, that he was able to take the family-owned company to the type of business that it is today.

“He was a remarkable and successful business person and cofounded the organization of Good and Accountable Government and helped people in sports and trained them in the business sphere. Waddy became ill but fought a hard long battle against his illness until his death in 2016,” Andre stated. “His legacy lives on with a thriving business which continues to employ hundreds of workers. His thrift, his generosity, determination and dedication are qualities which will continue to resonate throughout the length and breadth of Dominica.”

One of the sons of Waddy Astaphan, s prominent regional lawyer, Anthony Astaphan, said his father resided on “principle.”

“We are all proud to have had a dad …who ensured we all got the education and discipline needed or not and always put things in his context,” Astaphan stated.

The book, laced with six chapters, begins with the early history of Waddy Astaphan, then moves into the apprenticeship of Waddy Astaphan from 1941-1961, the genesis of the Astaphan conglomerate, marriage and family, medical challenges and at chapter six, ends with “Waddy Astaphan’s legacy.”