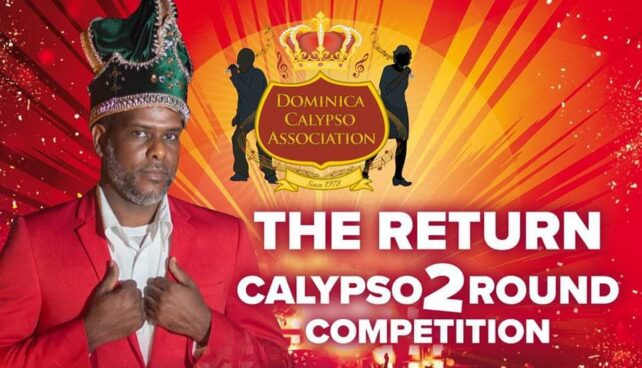 After two years of holding the crown as the reigning calypso monarch, come February 2023, Jude “Jay Dee” Delauney, will get the opportunity to defend his crown, as the Dominica Calypso Association (DCA) has announced the return of the two-round competition.

Due to the COVID-19 pandemic, in 2021 the calypso competition took on a hybrid format style, and calypso fanatics witnessed the first-ever virtual calypso which was won by Darryl ‘The Bobb’ Bobb, followed by reigning virtual monarch Tasha ‘Tasha P’ Peltier in 2022.

During an interview with Dominica News Online (DNO), President of the DCA Davidson ‘Observer’ Victor highlighted that the virtual competition has had no bearing on the regular competition since its suspension in 2020.

Expressing his delight over the return of the in-person show, Victor stated, “the two- round competition is more intense, which many of the fans look forward to because it puts more interest in the competition. So we’re excited to once again stage this event.”

Elimination will commence on December 17, 2022, followed by the quarter-finals carded for January 21, then the semi-finals which will be held on February 4, and the grand calypso finals on February 18, 2023.

As is customary, the various competitions leading up to the grand show will still comprise of a single round, and on the night of the big event, those who’ve successfully made it to the finals will perform their two calypsos.

Those who made it to the finals and semi-finals in 2020, will automatically get a spot in the quarter-finals round of next year’s competition.

The DCA president put on record his confidence that the show and the carnival celebrations will be a big hit, following the two-year hiatus.

“Calypsonians and writers are already preparing for the two-round competition because they have been told of a decision to go back to the normal competition. So we call on our fans to come out and support us,” he urged.

Registration for the competitions closes on December 15, 2022.