Economist McCarthy Marie believes that migrants are helping to fill in the gap in Dominica, particularly among the youth.

He was speaking during the ‘Eggs & Issues Breakfast’ panel discussion on Migration and Economic Development: The Dominica Perspective held at the Prevo Cinemall on Wednesday.

It was organized by the Dominica Association of Industry and Commerce (DAIC) in partnership with the International Organization of Migration (IOM).

Its objectives are to understand the makeup of the migrant population in Dominica, discuss the effect of ongoing outward migration on Dominica’s development and to explore the contribution of inward migration to economic growth.

According to Marie, generally, migrants tend to work hard and whatever their level of education they will accept the jobs that are shunned.

“It’s good for us that we have migrants coming in, they fill in the gap, particularly in the youthful population and the population that is in the workforce,” he said.

He mentioned, in particular the Haitian population living in Dominica, stating that one of the things they bring to the country is “youth”.

“The Haitian brings youthful energy to us…,” Marie stated.

Meantime Officer-in- Charge of the OECS Competitive Business Unit (CBU) Ricardo James believes that being able to absorb migrants into the labour market is important.

He said quickly they become contributors to society and that they are able to “access the labour market.”

And Head of Office of the IOM, Natasha Greaves said by interacting and integrating migrants in society, “it allows for them to become stable, they feel comfortable and they feel safe.”

The DAIC and IOM believe the discussion is of vital importance, not only for Dominica’s economic development but also for the diversification of the private sector and civil society.

The discussion was also aimed at understanding the challenges faced by migrants in Dominica and to explore solutions in order to sensitize the Dominican community for enhanced integration and to explore communication mechanisms with migrants in emergency preparedness, response, and recovery. 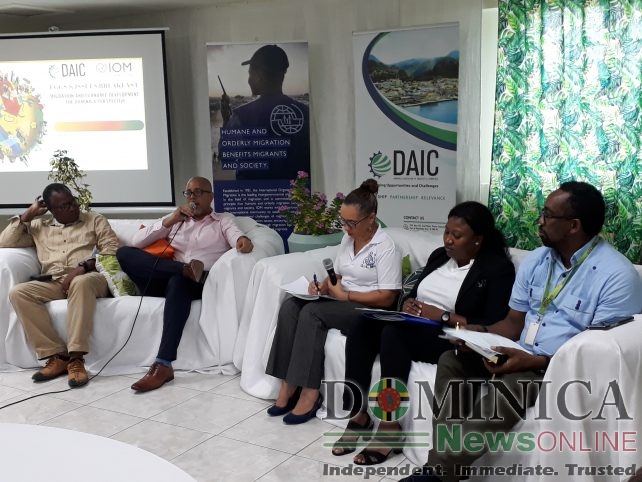