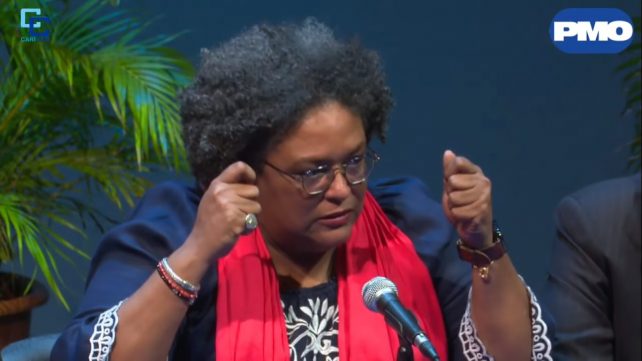 Barbados Prime Minister, Mia Motley, has insisted that LIAT – the regional airline jointly owned by Barbados and three other Caribbean governments including Dominica– is “doomed” under its current ownership, declaring her fellow leaders are “not on the same page” on the future of the cash-strapped carrier. Motley was speaking at a recent Public townhall meeting entitled “CSME – What’s in it for me?” in Barbados.

She has also said that the airline’s viability is not the sole responsibility of CARICOM, even as she declared that sustainable, reliable and affordable air travel is necessary for the region to grow.

She instead explained that is the issue of three or four governments needing to have shareholder discussions.

Mottley, who has lead responsibility for the Caribbean Single Market and Economy (CSME) in CARICOM’s quasi-cabinet, was speaking as a panelist at a CARICOM Secretariat-sponsored town hall meeting at the University of the West Indies (UWI), Cave Hill campus.

In a series of frank assessments of the fate of the 63-year-old carrier, she maintained that if the success of LIAT was left in the hands of the shareholder Governments alone, the regional carrier was doomed.

She did state, however, that it was important to be united on the future of the airline, which this year – despite a series of challenges in upgrading its fleet, control costs and manage a huge payroll – became one of the top on-time carriers in the region.

She hinted that the breakdown in negotiations between Barbados and Antigua and Barbuda on the sale of Barbados’ majority shares occurred because of their inability to come to an agreement.

Mottley reiterated the need for a minimum revenue guarantee policy to be implemented at LIAT, noting there was a similar policy at international carriers American Airlines and Virgin Atlantic Airways – again, stressing that in its current format, LIAT was simply not sustainable.