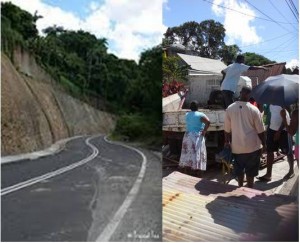 Information reaching DNO indicates that a vehicle driven by a male resident of Laudat plunged into a precipice at the eastern end of Bath Estate close to St. Aroment Back Road earlier today.

According to reliable sources, the Fire and Ambulance Services arrived on the scene shortly after the accident and transported the injured man to the Princess Margaret Hospital (PMH).

The extent of his injury is unknown at this time, however at the time the report was filed, he was said to be in stable condition.

DNO is following that story and will provide more information as it becomes available.

Meanwhile police are conducting investigations into the cause of a major traffic accident which happened on the Pointe Michel public road on Sunday.

Dumper truck TJ 203 owned and driven by a Point Michel resident lost control and drove into an abandoned house on the side of the road. According to information reaching DNO, it appears that the driver escaped injury but a companion who was sitting next to him was not so lucky it seems, and had to be taken by ambulance to the accident and emergency department of the Princess Margaret Hospital ( PMH ).

So far there have been no reports of fatalities but the vehicle is reported to have been extensively damaged.