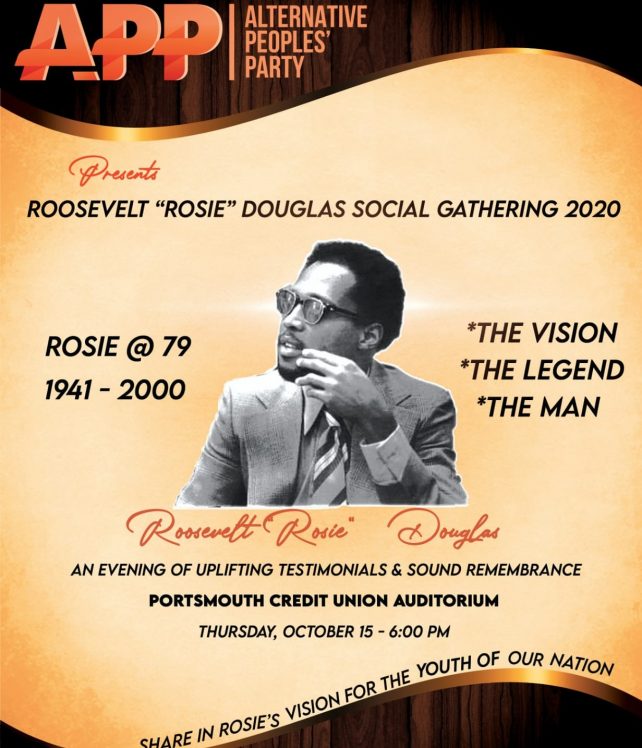 The Alternative Peoples’ Party (APP) will be paying homage to former Prime Minister of Dominica, the late Roosevelt ‘Rosie’ Douglas, on Thursday October 15, 2020, the day he would have celebrated his 79th birthday.

The event, the first in the series of annual social gatherings, will be held at the Portsmouth Credit Union Convention Centre from 6:00pm.

“We believe that the Rosie Douglas Social Gathering (RDSG) is a deserving tribute to a most deserving humanitarian, father, friend, comforter and leader,” an APP press release states. “We stand by the view that Rosie’s vision of youth empowerment, through education and self-sustenance and civic participation, has been lost with his death, and this event is meant to promote and help preserve his legacy.”

The APP goes on to say in the release, that part of the party’s mandate is to work towards the realization of a more united Dominica by revisiting the ways which defined the Dominican person.

It adds that the mission is aimed at bolstering community relations and cooperative spirit. Addresses will be given by former agriculture minister and political activist, Athie Martin, attorney at law and social constructivist, Gabriel Christian, international media consultant, Felix Augustine Jr., and political scientist, Alex Bruno.

The party also plans to present aspects of its vision for Portsmouth at the gathering; a vision, which APP says,  coincides with Rosie’s vision for the economic growth of the town of Portsmouth and Dominica, by extension.

APP is inviting members of the public, especially residents of Portsmouth, to attend the event.

“We will be strictly observing the Ministry of Health COVID-19 protocols of physical distancing, and mask-wearing requirements,” the release concludes. “Seating accommodations will be provided until we meet the physical distancing seating capacity. Therefore, attendees are encouraged to arrive early.”