The head of the largest religious organization in Dominica says he will not be intimidated, as investigations of alleged sexual misconduct by a local priest continue.

Recently, allegations surfaced, that 19 years ago, Father Reginald Lafleur sexually abused a young woman, prompting a decision to send him on administrative leave.

However, that move did not go down well with Grandbay parishioners who staged a massive demonstration in support of Fr. Lafleur, their Parish priest, during Sunday mass.

Bishop of Roseau His Lordship Gabriel Malzaire, who, for the first time,  has spoken publicly about the matter, has said that the behavior of the parishioners was unfortunate.

“As the Bishop I have rules to follow. Rules that are stated by the church. Rules that are stated by canon law-the laws that govern the church and In cases of allegations of sexual abuse in the church, we are duty bound to respond in a certain way…Unfortunately the reactions were the way it was and things were communicated the way it was communicated but I was only following the rules of the church,” he said during mass on Sunday.

He said in some Caribbean islands, when there is an allegation of sexual abuse, the Bishop is duty bound to turn the case over to the civil authorities.

“This is not the case in Dominica. In Trinidad for instance, if there is an allegation of sexual abuse, the Bishop is duty bound to turn it to the civil authorities and the person would be immediately send on administrative leave. We have been on this case for practically 8 months. So we have been looking at it very closely and trying our best to look at the credibility of the whole situation,” he added.

The Bishop further explained that administrative leave was instituted so the review board could continue the investigation.

“We are not saying one is right and one is wrong. I know out there, some people have determined what is true and what is not true. We do not know. It is being investigated. Therefore people who may try to intimidate the process or intimidate the Bishop, they are making a big mistake.

He has asked Dominicans to pray for a resolution to the problem.

“I am asking that we face the issue with prayer. Prayer for the alleged victim and the also the one accused. Pray that the process   its course, we have to realize that we are in a world that is flawed in many ways. Mistakes are made everywhere in the world. No one is exempt. We may think that our country is preserved from everything but no…” he said.

Survivors Network of Those Abused by Priests (SNAP), an international organization which speaks on the behalf of those abused by members of the clergy, has said it is “appalled” by the manner in which Bishop Malzaire handled the situation. 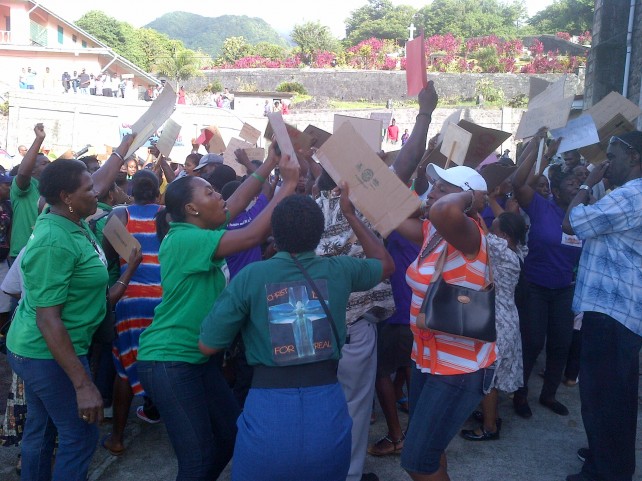