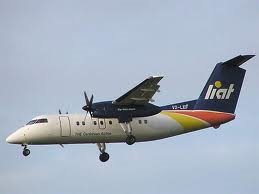 A sizable cash injection of eight million dollars will be pumped into regional carrier LIAT, half of which is expected to be delivered this week.

The funds are coming from the government of Dominica whose prime minister Roosevelt Skeritt made the disclosure at an OECS meeting in St Vincent & the Grenadines last week.

A week ago, the airline recorded 35 million dollars in losses after fire destroyed its maintenance hanger, an aircraft; tools, operations office and several other offices.