A project geared at adopting a comprehensive approach in improving knowledge, awareness of disaster risk management and climate change adaptation was officially launched on Wednesday.

The Building Resilience and Adaptive Capacity to Climate Change and Disaster Risk project launched in the Kalinago Territory, and expected to be completed in October 2023, focuses on building resilience. This initiative was developed under the Caribbean Development Bank Community Disaster Risk Reduction Fund (CDRRF).

“Implementation of the project began in November 2021 and we intend to complete everything by October 2023,” Minister for Environment, Rural Modernization and Kalinago Upliftment , Kozier Frederick said while addressing the launching ceremony.

He continued, “The project will help the Kalinago Council to become better in handling situations in terms of emergency. It will also assist people in our space to manage disaster risk and climate change impacts.”

According to the minister, the government has adopted a widespread approach, “which means we will continue to engage all stakeholders from the beginning to the end of the project.”

He said employment will be provided for community youth from the hamlets who will be engaged to collect data.

“We will also do some serious training that will benefit all residents. In the end we will all benefit from this project,” Frederick stated.

He added, “We would have improved our local capacity to plan and secondly we will increase community engagement and have access to a safe, dedicated emergency facility. This project will make us respond even quicker.”

He said even after construction, there will be jobs in the area of maintenance and general upkeep.

Prime Minister Roosevelt Skerrit sees the project as having a transformative effect on the community of Batacca and the entire Kalinago Territory.

“Here we are witnessing the official launch of this very important project, a major edifice, a major facility that will help to transform the community of Bataca and the entire Kalinago Territory,” he said.

The Prime Minister believes that Dominica can build resilience, however he acknowledges that the challenge of building in a resilient fashion is that it is much more expensive.

“It will cost between 30 % or 40% more, but in the long-term, the investment is worth it,” Skerrit explained.

He said his government made a commitment to build no fewer than 200 homes in the Kalinago Territory adding that this year alone, some 160 homes will be constructed for the Kalinago people.

Meantime, Vice President of the CDB, Isaac Solomon who made his presentation via zoom, said the CDB is confident through this project and in keeping with Dominica’s commitment to become the world’s first climate resilient nation, the people of Dominica will see opportunities to build resilience and sustain livelihoods.

He said the project design was supported by specific studies and surveys done within the Territory which engaged a wide cross section of the population.

“We look forward to the output that will be developed through this approach,” Solomon noted.

This he said will include the preparation of inclusive community-led developmental modality plans, the implementation of resilient building measures, the provision of training in disaster risk management and climate change adaptation and the construction of a multi-purpose centre which will serve as an emergency shelter and host various community activities ensuring full respect for the identity, dignity, human right and cultural uniqueness of the Kalinago people.

Some of the activities under this project will be the provision of equipment and supplies for the emergency shelter along with training in shelter management, disaster risk management, and initial damage assessment as well as training and building maintenance. 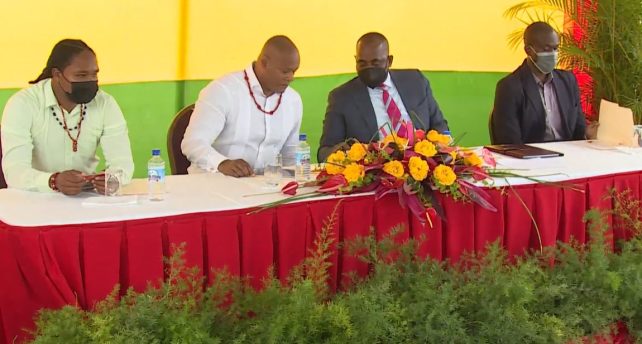