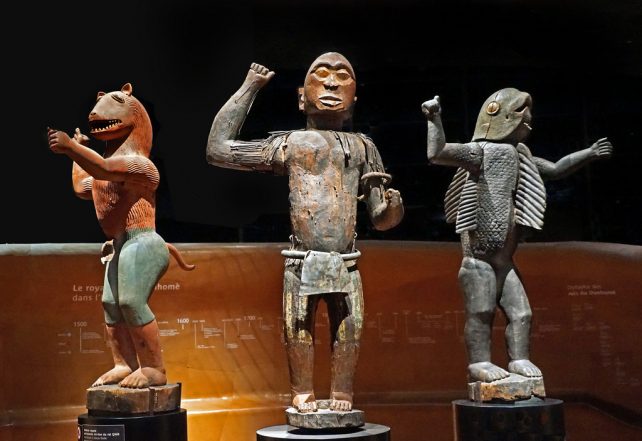 Colonialism Reparation is part of the movement for the condemnation, the reconciliation, the apologies and the compensation for colonialism.

Colonialism Reparation promotes, supports and spreads non-violent activities aimed to create awareness of the current world situation and thereby to encourage the achievement of its objectives

The contribution of every person who recognizes the importance of this activity to the creation of a climate of friendship and cooperation between peoples is necessary and appreciated. This contribution will create an extremely positive precedent in international relations as well, promoting the supremacy of the “force of law” on the “law of force”.

In recent months demands for the repatriation of the remains and the definitive restitution of the treasures have continued, as well as the attempts by some former colonizers to hinder this inevitable step of human evolution.

On May 22, 2020 the Minister of Culture and Sports of Greece Lina Mendoni renewed the demand for the restitution of the Parthenon marbles, removed by Thomas Bruce 7th Earl of Elgin during the colonial period, to the British Museum of London in the United Kingdom.

On June 12, 2020 the Office of the United Nations High Commissioner for Human Rights published the draft of the report Repatriation of ceremonial objects and human remains under the United Nations Declaration on the Rights of Indigenous Peoples, whose final version planned for September 2020 has been postponed for the COVID-19 pandemic.

On July 3, 2020, in the presence of the President of Algeria Abdelmadjid Tebbounee, the remains of twenty-four Algerian resistance to French colonization were welcomed in Algeria with a ceremony at the airport of Algiers, after having remained for a century and a half at the Muséum national d’histoire naturelle of Paris in France.

On September18, 2020 the Minister of Tourism and Antiquities of Egypt Khaled El-Anany renewed the demand for the restitution of the Nefertiti Bust, removed by Ludwig Borchardt during the colonial period, at the Neues Museum of Berlin in Germany.

On October30, 2020 the Minister of Culture, Gender, Entertainment and Sports of Jamaica Olivia Grange demanded the restitution of the sculptures of Taino zemi, removed by unknown persons during the colonial period, at the British Musem of London in the United Kingdom.

On December 16, 2020, on the occasion of the opening of the Humboldt Forum, the Ambassador of Nigeria to Germany Yusuf Maitama Tuggar renewed the demand for the restitution of the treasures looted during the colonial period to the German Museums, followed in early 2021 by the artistic intervention of Emeka Ogboh in collaboration with the Museum für Völkerkunde of Dresden in Germany.

On December 24, 2020 the French Parliament promulgated the law 2020-1673 on the restitution of cultural property to the Republic of Benin and the Republic of Senegal with which, while respecting the promises made on November 23, 2018 by the French President and on November 17, 2019 by the French Prime Minister, a case-by-case approach is however chosen instead of an amendment of the Heritage Code to make definitive restitutions possible and permanent.

Colonialism Reparation asks the repatriation of the remains and the definitive restitution of the treasures looted by former colonizers (United Kingdom, France, Germany, Spain, Portugal, Netherlands, Belgium, Italy, etc.) as a first step in the direction of the Reparation of the damages of colonialism, stopping to hinder an inevitable step of human evolution.